Best Bachelorette Party ever!!!!  I’m allowed to say that because to me it was, because it was my one and only.  I actually think that all Brides to Be should have their own bachelorette party as their first because there are no major expectations, there are no comparisons, there really is nothing to be let down by.  My friends are awesome and threw me such a great day and I truly do feel so special.

After a very fun cocktail party and impromptu dance party at the Dodd’s on Friday with our FareStart friends, I was loosened up in the dancing category and the drinking category to truly enjoy Saturday.  Marika met me at Cortona for coffees and then chauffeured me to the Washington Activities Center at UW to meet the three other girls joining us to rent some canoes.  We were on the water early in the morning and setting “sail” for the Arboretum.  I had never rowed into the Arboretum before and it was actually AWESOME to paddle through the lily pads and dodge fallen trees.  We saw some turtles and tons of ducks.  We made our way to a picnic spot to have the lunch that Marika had packed for us.  Caprese sandwiches, salty snacks, and mimosas drunk out of pineapple cups.  We all had t-shirts made for us and I also had “Bride” sunglasses to wear and a coconut bra.  We made our way back to the boathouse in the full and glorious sunshine and piled into the car to head to my house. 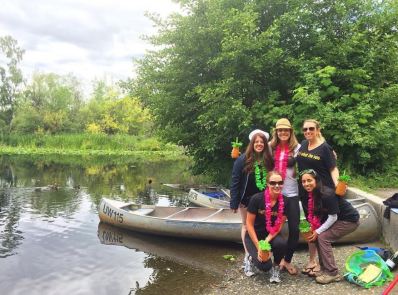 Love this photo. Successfully made it under the downed tree. 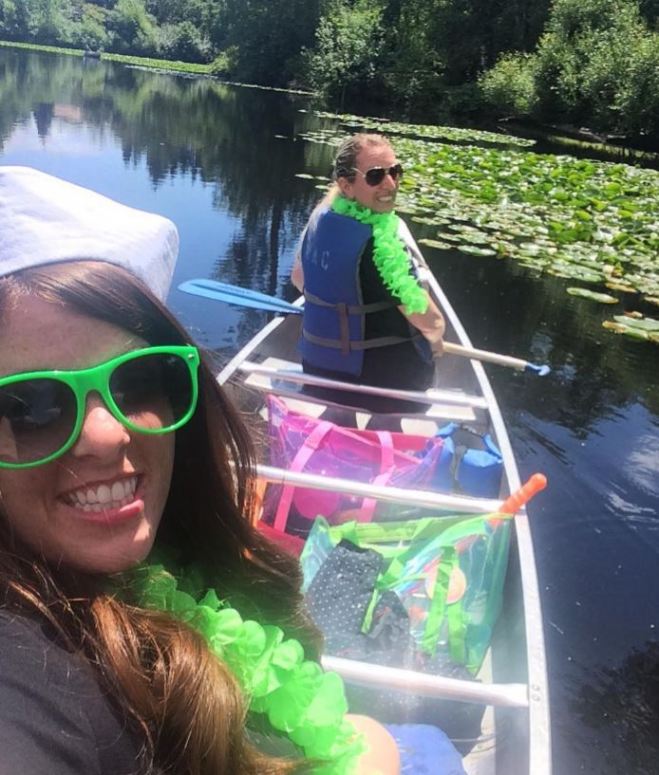 Bridesmaids in a boat.

Woopsie #1:  Locked myself out of the house

So I desperately called Bryan six times like a needy chick and Marika and I met him at Seward Park to get his keys.  Solved and in the house we were.  The three of us showered and got dressed up for the night.  Marika and Polly had decorations for the house and the other girls started arriving.  All the girls were wearing black and I was supposed to wear white.  I had a veil to wear, a sash, and a ring shot.  Polly made a rum punch and shortly we settled into a few bridal gifts and then the fantastic game that Polly made and Bryan starred in.  Everyone found it extremely entertaining, for me pretty embarrassing but I didn’t mind and I was pretty much laughing hysterically the entire time.  Once the game was finished we all filed out in three Ubers to Teatro Zinzanni.

Arriving at Teatro Zinzanni in fashion we all regrouped in the lobby to order some drinks at the bar and take a few group shots that came out amazing!  Around 6:30 pm we were seated at our table and the show began.  It was a 3+ hour show complete with a 5 course dinner that was actually really delicious from start to finish.  Each course came out separately so we were all pretty hungry when our sirloins (for most of us) were served at 9 pm.  Especially with having had so much to drink.

Woopsie #2:  I forgot my ID in the jacket pocket from the canoeing.

Of all people to not have their ID, it was me.  Teatro wasn’t cool about it either and literally took my beverages away from me.  Not happy and Angela transitioned into mission mode.  Angela took care of the whole thing, texting Andrew and Bryan to get the key and get my license to bring to me.  They were knights in shining armors and even left their man date to obey Angela.  By the salad course I was back into business, catching up quickly, and back to enjoying the show without attitude.  We had a smoked salmon profiterole, a delicious spicy seafood bisque, a strawberry salad, a great steak with sweet potato cake, chimichurri and asparagus, and a chocolate and raspberry cake to conclude the meal.  The show was very entertaining.  There was a magician, two aerialists, an operatic singer, another famous singer and dancer, a jokester, and the servers who also put on a show.  The theme was antics occurring at a Parisian hotel.  It’s cabaret and they were not afraid to be a bit risque.  We had a good time and upon the completion of the show we were all pretty tipsy and ready to hit the club.

Three more Ubers to Capitol Hill to drop us off in the insane atmosphere of the Pride Weekend festivities.  We all headed to Havana and actually made it in without much line.  This is where I remember dancing and having a great time but drink after sugary drink were handed to me and I started to really get loose.  Most everyone stayed out up until the end, including Valerie who is due for her first child in only a week.  What a trooper!!  Just before closing I called it quits and we all got cabs back to my place.  Polly ended up sleeping over in the guest bedroom and I don’t really recall anything that happened once home.  I was ready for bed.

Sunday morning was a beautifully sunny morning and although I certainly woke with a headache and symptoms of a hangover I wasn’t feeling too bad.  I was up around 10 am and Polly and I found Bryan asleep on the couch.  Marika brought us over more coffees from Cortona and Bryan made us bacon and eggs that really did help with the hangover.  The girls stayed over and reminisced for a couple hours and around noon helped clean up the house and then said their goodbyes.

Five minutes after they left you would have found me lounging on our chaises on the back deck.  Bryan joined me for a little while but then we had to shower and head to Capitol Hill for our private dance class.  I was very unsure of how the bopping around would feel to me but we actually had a successful lesson, learning an entire minute of choreography.  After class we decided to get cold beverages and take a walk through Seattle University.  It was nice strolling in the fantastic weather without really a destination or a need to go anywhere.  We strolled through the Capitol Hill farmers market and Cal Anderson Park before heading back home on the scooter.  We spent the afternoon relaxing more or less and then set out to Luis and Carina’s for the season finale of Game Thrones, complete with tons of snacks and meat pies and a short time spent on their rooftop deck.

It was a phenomenal weekend.  I got to see so many of my good friends and totally feel like we are in wedding mode now.  We have a fun week planned out and a long weekend coming up.

But I do want to give a shout out to Bryan as my hero because I really don’t know what I would have done without him on Saturday!!!  Woopsie!