Vacation over…bummer!  Bryan and my first trip to the Hawaiian Islands is already over and I already want to go back, or I at least need to book another trip pronto.  We had a great time sightseeing in Kauai and spending quality time with Lon and Trish.  It was a relaxing and restful week but was spent well with excursions, exercise, food and activities.  I’m impressed that we really did a good amount of stuff in a week’s time, while letting it still rejuvenate us with sleep and peace.

All four of us arrived at the exact same time.  We could spot each other’s planes taxying to the gates.  All bags arrived and we were quickly to Avis for our sweet ride minivan.  Transportation provided we were next heading to Costco to fill our cart full of essentials for the week and then ready to hit the main road to drive the 45 minutes to our rental condo in Princeville, Kauai on the north shore of the island.

This was the first our eyes had laid on the island and we took it all in on the ride and enjoyed the sights of the greenery, flowers and every once and a while the ocean coastline.  We pulled into Puu Poa condonminuims around 5 pm and were in awe of our views from the room and the huge swell and waves beneath us.

The Princeville statue at the entrance to the neighborhood.

Our first views from the room.

We unloaded, checked out the digs, then piled back in the car to drive the short 10 minutes further west down the road to the cute town of Hanalei for dinner at the highly reviewed and low key Hanalei Gourmet.  We all got their fish tacos of the day (marlin on this night) and were blown away at how good they were.  Trish and I got our first mai tais that were strong and would have been Phil-approved while the boys tried some local brews on draft.  Halfway through our meal a local band duo starting playing that really set the mood for me but we were all pretty wiped from our early wake up calls that morning and the traveling so we headed back to the condo to get some good zzz’s. 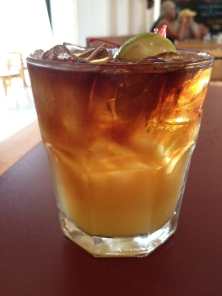 My first mai tai in Hawaii was so good.

Our first full day in the condo was Thanksgiving Day.  This was feeling much like our trip last year at this point.  The sun was in and out that morning and we took advantage of it having our coffee and breakfast outside and taking in those views.  Bryan and I walked to explore Hideaway Beach beneath the condos (which was an adventure in itself walking down the steep path) and the neighboring St. Regis and Hanalei Bay Resort before meeting at Foodland for the nights turkey dinner.  It was a nice relaxing morning and we both got to talk to our families afar. 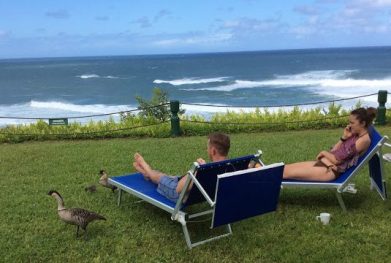 Those views and a family of geese.

Afternoon quickly came and Bryan and I decided to go for a run.  We took a 4-mile slow jog to explore the grounds, came back sweaty and hot, and jumped quickly in the pool.

First run of the trick.

Refreshed, we came back to clean up for our easy (but actually quite good) pre-made Thanksgiving dinner compliments of Foodland grocery store in Princeville.  A 13-lb turkey, mashed potatoes, gravy, stuffing, rolls and our green beans and salad made for a filling traditional Thanksgiving dinner.  To complete the night we had pumpkin and apple pie with ice cream.  A good Thanksgiving celebration indeed.

After a low key day in the condo we were ready for adventure and sightseeing on Friday.  After a hearty breakfast at home we headed on the road around the island to the southwest corner and Waimea Canyon.  We stopped at a recommended coffee shop that was really delicious and made it to the Canyon Trail trailhead around 1 pm. 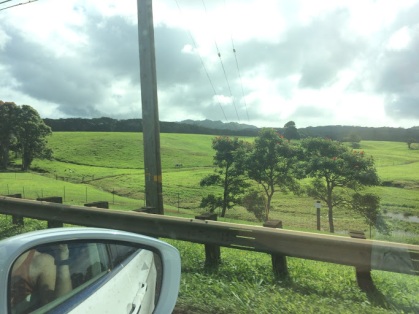 Driving with the window down. 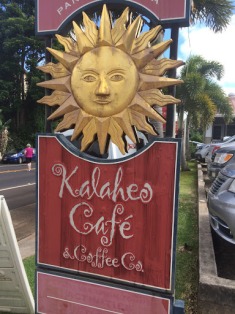 Bryan and I left Lon and Trish with the car to complete an 8-mile loop.  This loop started in a light drizzle and the trail was indeed a little slick.  About one mile in we made it to the main overlook of the canyon that many people stop at.  It was gorgeous but we continued on the trail.  We had a river crossing about 2 miles in that soaked our feet but from there on out we never passed another hiked.  About 3 miles in we came to a higher lookout that had absolutely marvelous views of the canyon and this is where Bryan and I stopped to share a turkey sandwich to take in the views.  We continued on to find an even better lookout with a picnic table and took some more photos.  We kept going, bringing us back in the thick of the trees for a definite jungle walk. We decided to hit the road 6 miles in, stopped at the museum and lodge before meeting the parents back at the trailhead.

First glimpse of the canyon 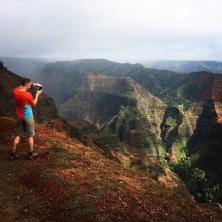 We tried driving to the end of the road to the lookouts of the Napali Valley but were totally socked in with fog so we turned around and headed back down the road, catching a few other lookouts of the canyon, the sunset, and finally stopping in the town of Hanapepe for their Aloha Friday celebration, getting dinner al fresco at Bobbi’s Hawaiian Grill where there was again a duo playing local music.  We window shopped a bit and then drove back the rest of the way to the condo.

Catching the sunset driving down the ridge. 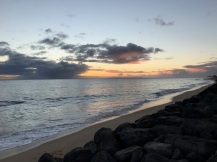 Bobbis for our first Hawaiian flavor

A sightseeing day followed by a rest day is just perfect and that is how Saturday went.  After a loss to Ohio State and breakfast we packed out beach bags and drove to Hanalei to stop at their Saturday morning farmers market for the fresh local fruit I was longing for.  We got three papayas, the largest avocado I have ever seen and sample a variety of other things. We continued west to Tunnels Beach, found a good spot to set up at and enjoyed the sun that was out!  Bryan and I strolled this beach, passing a resting monk seal on the beach and then watching some surfers actually surf real good.  We spent a few hours at this beach until the sky began to look a bit ominous and we left just in the nick of time before it started downpouring.

Beautiful even amidst the clouds

Look at these avocados…Bryans hand for reference

We drove back to the condo where Bryan and I changed to go for another run.  Rain had stopped but halfway through our two mile run it started to rain, and rain hard.  This run was a bit adventurous and fun and had us running down to the beach at the St. Regis, running on the beach and ducking for trees.  We made an impromptu decision to go swimming, taking off our running shoes and hitting the water.  The rain stopped and we decided to finish the run, which we did.  One of the best runs ever.  We got back to the condo where Trish was finishing up her famous taco salads.  We had a great dinner in and went to bed early knowing we had to wake up early the next morning.

So far so good but there is even more better stuff to come!