I’m back at work today and feeling relaxed!!!  Our trip to Michigan was a good one and filled with a lot of long slumbers, seeing family, a little exercise, a bunch of good food, and a lot of football.  I wouldn’t expect really anything less.  We left late on the night of the 23rd and got home just before the ball dropped (on the Pacific) on New Year’s Eve.  Here’s a little recap of what fell in between.

Chelsea is reprioritizing time, price, and ease of travel in future flight itineraries based on this trip.  Bryan and I flew the redeye to Chicago, getting in on Christmas Eve with a two-hour flight delay and a 3.5-hour drive to East Lansing.  We both arrived red eyed and out of it but also glad to finally be there and ready for the holiday.  There were many presents to wrap but we got cleaned up and my grandparents came over to have the usual king crab legs and clam chowder for dinner.  It was an excellent meal and Bryan and I had just enough energy to make it to the 9 pm Christmas Eve service at People’s Church.  We didn’t walk there this year because the snow was still coming down and the temperatures were dropping!

Christmas Day was the same as it always is.  Open presents at home, clean up, be the last family to arrive at Grandma’s, take two hours to go around opening presents, and eat way too much good casual Christmas food; chicken wings, beef sandwiches, my aunts baked beans, cheesy potatoes, coleslaw, and of course lots of Christmas cookies.  Bryan and I braved the cold to stretch our legs with a walk just as the sun was going down.  This was when we realized we were in for a very cold week, something we haven’t had in Michigan yet. 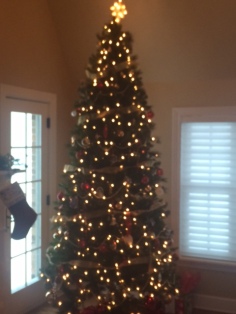 Generally what I think is appropriate on Christmas morning

The middle part of the week is where a lot of relaxing and conversation comes in.  Activities include two trips to Court One to break a sweat, getting out for cross country skiing once to Birchfield Park in Holt for some fresh air and serenity, getting the legendary topopo salad and margaritas at El Azteco, middleeastern food, pizza at home, Jersey Giant subs while watching the MSU bowl game at grandparents’ house, Louisiana food and excellent jazz in small town Owosso, a puzzle, and lots of football watching. 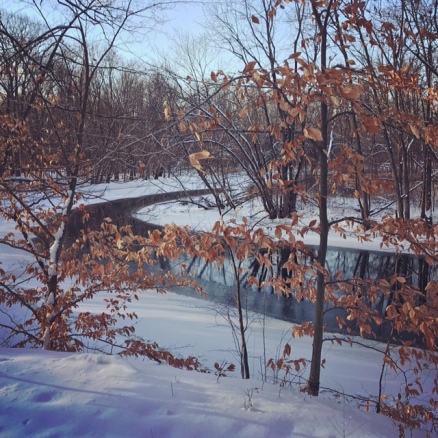 Skiing along the river

Great jazz was found and had even with song requests by Dad, table B seat number 16.

We said goodbye to Chad on Thursday so he could head back to Chicago to pick up a friend coming in for New Years.  The parents and us went to Detroit for the day on Saturday and had a good time.  We started with a great Spanish lunch of tapas in Midtown at the cute La Feria.  After filling up we stopped at the Detroit Institute of Arts and I was blown away by how good it was.  I haven’t been to a ton of museums in the U.S. but I must say of the ones I have been to, I think I enjoyed this one the most, even more so than MOMA in New York.  After several hours of exhibits, including the special exhibit of Monet which was wonderful, we drove downtown to park and ride the People Mover, Detroit’s elevated train from 1987, just for fun.  And we rode it around twice.  It was interesting to me and you could catch a lot of the sights around Detroit, the Renaissance Center, the Detroit River and Windsor across the water, Joe Louis Arena, Comerica Park, Ford Field, Grand Park, Greektown, etc.  It was fun people watching too, mostly of those going to the Pistons game at the new Little Caesars Arena. 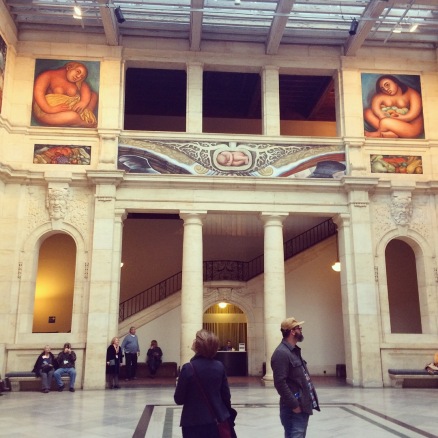 Mom in the DIA 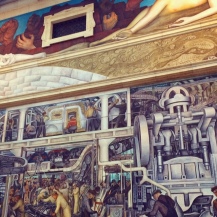 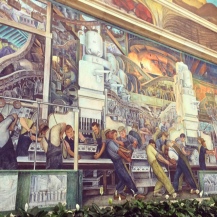 More of those murals

Monet is great, visit confirmed that

One of our favorite Monets 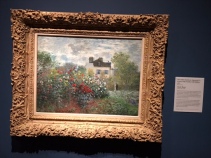 Getting off we had one last stop to get the famous Slow’s BarBBQ on Michigan Ave.  Without a reservation, we sat at the bar and ordered a wide variety of items.  Food was amazing!  Especially the brisket (even said so by the uber-particular Bryan and Dad), the ribs, the BBQ sauces and their baked mac and cheese.  We barely finished it all but of course we did.  The ride home was something with all of us so full.

We had to leave East Lansing Sunday midday but were able to get one more needed workout in before doing so.  With bags packed and turkey sandwiches packed for us we picked up our rental car to make the drive to Chicago.  We hit one pretty snowy band of lake effect snow in Michigan City that slowed us down and stressed us out but we still made it to O’Hare with plenty of time to get a great Mexican dinner at the famous Rick Bayless’ La Frontera Grill for a torta and taqueria salad that were both amazing and to watch the Seahawks lose.  Our flight got in early and we had an easy route back home to get in with an hour to spare before the ball dropped (on the Pacific) to ring in the new year.