As the holidays are approaching it seems like everyone is getting sick.  We are no exception, as we both came down with sore throats, achy bodies, and sniffles over the weekend and the entire office and city seems to be as well.  But the festivities go on as do we, sickness and all.  And we still had a good weekend and a good time drinking and eating more than we should given the circumstances and staying out late.

Friday night, Bryan and I headed over to Bellevue on the eastside for some laughs at the Parlor Comedy Club, seeing Harland Williams who was definitely one of those pick on the audience type comedians so thankfully we had a bottle of champagne to enjoy the antagonizing.  We also visit Bellevue leaving us with a funny feeling and grateful to make it back to Seattle.

Saturday morning is when the true suffering began.  I woke up hardly able to swallow or talk.  Very worried about my ability to attend the Christmas Party that night, I downed several cups of Throat Coat tea before heading to my hair appointment to get my hair lightened again.  Once Saturday night came I had conned myself into thinking I was feeling better and we both got dressed up for the party and headed to Georgetown to the Museum of Flight.  Our company’s party was in the “shuttle room” so along with the usual dinner and drinks we got to tour the inside of the simulation shuttles used to train every single astronaut who has been in space.  That exhibit was pretty cool but overall the entertainment and space was a little odd.  The food must have been good because both Bryan and I left with a horribly full stomach.  Our sickness hit us just before 11 pm when we both became completely tired and headed home. 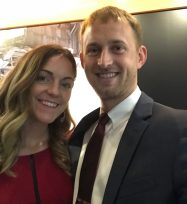 Right before we scrammed. 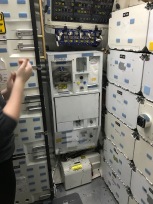 Many buttons and compartments

Sunday morning came and with it lots of rain and grayness.  We attended a great Christmas-catered service at church, then picked up some items for the gifts we were making, and headed home to settle in for an important Seahawks game.  After a good brunch, the bad game began and it was horrible and wasn’t getting any better.  We turned it off at the beginning of the 4th quarter because it was upsetting us both and began the task of making our gifts.  It was a team effort and we were happy with the outcome.  We made a good dinner to enjoy at home in front of our Christmas tree, lazily ending a good weekend.

Less than a week until Christmas!

And in a blink of an eye October has vanished.  Very quickly.  It’s been well over a week since my last post and quite a bit has happened.  All good, none bad, rejoice!

We continue to have weekends at home which is nice.  Last weekend was just Bryan and I more or less and more relaxing time than anything.  It was pouring rain for the vast majority of the weekend.  We got dinner just the two of us at Din Tai Fung, watched football, went to Billy and Val’s orchestra concert, went to church, and had a good brunch at Poquitos.

We needed a low key weekend because last week was rather eventful for us.  I had my monthly SEAW dinner meeting on a fascinating but mentally taxing topic (after a 9 hour day of work) by a professor from the University of Texas.  I managed to get to barre class twice and ran once during the week in the glorious fall sunshine.  I had my weekly girls meeting on Wednesday after a great (and free birthday) dinner at the nearby Red Robin on the waterfront by work.  Meanwhile, Bryan went to Stephen and Ewelina’s for dinner with a few friends after a long row.  And FareStart was it’s usual grand self while staying quite late talking with our FareStart friends with our departures seemingly getting later and later.

This weekend was really a fantastic weekend!  I hurried home to get dinner made for Bryan’s coworker Mark and his son who I haven’t seen for well over a year.  I was frantic in preparations but then dinner was conversationally easy and relaxing.  Saturday morning Bryan and I both watched our teams play the early game in our PJs before setting out in the absolutely gorgeous weather for our favorite lap around Seward Park.  Saturday night I hosted the first (of hopefully many) girls night in while Bryan hung out with the guys for their night “off”.  Five of us girls enjoyed baking two really delicious, and new to us, fall desserts, using the abundance of pears and apples I had on hand, talking, eating a yummy fall dinner, and then settling in with multiple bottles of wine to watch Magic Mike and eat our sweet creations.  I had a great time and Bryan did as well; grilling steaks, drinking beer and whiskey, hot tubbing and going out to the bar to drink more and play video games.

My night did me in less than Bryan’s and Sunday morning came around but Bryan didn’t start out on the up and up.  Instead of going to church this week we headed over to Randy’s condo overlooking Shilshole for his annual donut party.  It was good to see Marika and Randy, the donuts were good, the coffee was needed, and before long the sun was trying to come out and Bryan and I were on our way to Centurylink to go to the Seahawks vs. Texans game.  The game started fast and furious and kept up that way the whole game.  The Seahawks scored way more than usual and let up way more than usual.  It was an exciting game from start to finish.  The sun came out full force in the second quarter and I was in high heaven soaking up the sun, yelling my lungs out and thoroughly enjoying the crowd and atmosphere.  Russell Wilson proved himself again with shear seconds left and the Seahawks pulled out the victory at the very end.  We were electrified leaving the stadium and  headed to get food at the new Halal Guys in Pioneer Square (the same group as the legendary street trucks in NYC) and enjoyed our gyro platters and chicken sandwiches before heading home.  Both of us were exhausted but the epic marathon of a World Series game kept us up. 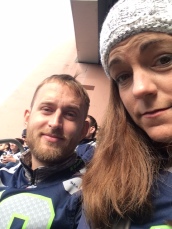 Such a great weekend…friends, food, and finally all of our teams with a win!!