So our weekend was a success!  Bryan and I kicked some booty in the Seattle Rock N’ Roll Half Marathon and ended up having a great time doing it.  We both beat the goals that we had set out for ourselves and were happy people post race.

Friday night after work we met at Centurylink for the craziness that was the Expo.  Picking up our bib, our t-shirt and gear bag, and strolling around the many vendors in search of snacks and samples and anything of interest was a difficult mannuevor.  The place was a zoo.  After some time we set out to get some dinner in the form of carbs.  We thought of hitting Tavolata for pasta but when we arrived there were no reservations to be had.  A few other places we called wouldn’t be able to get us in until late.  With our heads on Italian pasta we realized where we had parked and decided on the short walk to Ti22 for Thai pasta, a la pad kee mao.  We hadn’t been in awhile and it felt like home.  We each got our own dish of noodles and split the tom kha soup for extra nourishment.  I was stuffed to the gills as we walked out of there.  We had to pack our bag and prep our clothes for the race and did make it to bed on the relatively early side.

With three alarms set for 5:00 am we were ready to roll early in the morning.  We had a quick snack at home, dressed, and then headed out on my scooter.  With the scooter we found easy parking close to the Seattle Center for free and made our way over to the race start with a quick stop at Caffe Ladro for a coffee for me.  We checked our gear, got bananas and waters and sat with time to spare in the cool temps of the morning.  The race was supposed to start at 7:00 but got pushed back until 7:15 so we were waiting even a bit longer.  Bryan started in corral six and me in corral 13 started about 15 minutes after him.  But by the time actually came for us to begin the race I was more than ready, and cold, and my joints felt the cold and ached.

The first mile was achy joints and lots of people.  Through lower Queen Anne we ran and then mile 2 and 3 felt like even more people that I had to dodge in tighter spaces.  These miles were along the Viaduct tunnel and then on the Viaduct with views of the sound and downtown.  I just couldn’t enjoy these miles though because I had to be so careful of where I was running.  I was very annoyed with the slower runners that did not start in their appropriate corral.  We turned around on the viaduct before heading up to 2nd Avenue and coasting down through the Internationational District, up Dearborn St. and then hitting Rainier Ave.  Rainier Avenue was much too long of a stretch of nothing.  This nothingness was also slightly downhill, however, I was finally able to zone out with more room to run and I started to slow down.  I caught myself about a mile and a half down Rainier and woke myself up. 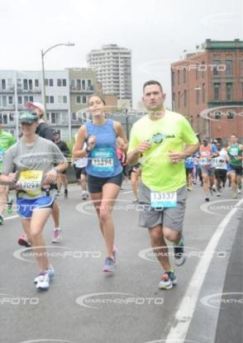 Me on the viaduct around mile 2. 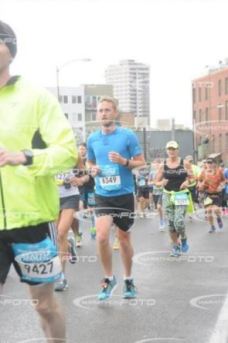 Bryan on the viaduct around mile 2. 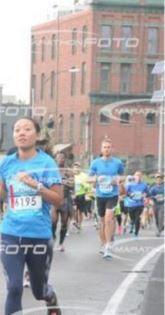 Another shot of Bryan on the viaduct.

The race didn’t route us off of Rainier until nearly mile 8.  I was looking forward to mile 8 to get to our familiar Lake Washington Blvd and to get some race-supplied Glukos energy shots.  This helped a lot as I was just starting to feel a small drop in energy.  On we went, with about a mile and a half on Lake Washington and then climbing a short but sweet hill to enter the I-90 express lanes tunnel.  This was the worst part of the run in my opinion.  Tunnels are trippy.  First, the entire length of the tunnel was a steady slight uphill but that is hard to see in the dark.  Then there is the dark which is a little claustrophobic feeling.  Then you just don’t have great airflow in the tunnel.  It was warmer and stuffy and I was ready to get the heck out of there.  There was almost an entire mile in the tunnel.

When it spit us out we were at mile 11 and this part might have been the best in my mind.  We were now still on the freeway ramps but with views of downtown in the clouds and fresh air and a steady downhill I was feeling good.  At this point I also started passing passed-out runners.  There were three in total and each time I took an exhale when I knew they weren’t Bryan.  So we were downhill for much of miles 11 and 12.  The last mile came and the stadiums were in sight already.  We followed the ramp right by the stadium but then unfortunately had to climb a curly-que ramp up before descending one last time to the last straight away.  I know Bryan and I were both at a sprint at this point.  I gave everything I had in that last 1/4 mile (and even a little further out too) and crossed the finish line feeling strong.  Never did see the camera man to strike a pose for him before I finished. 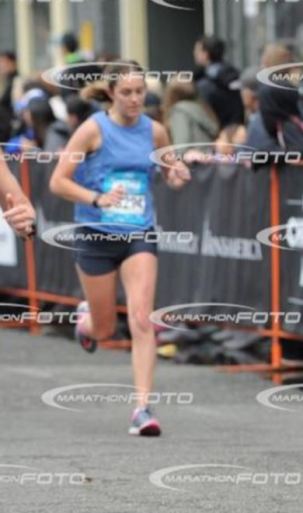 Me sprinting to the finish line. I tried so hard to find Bryan’s crossing the line but I think he was too fast. 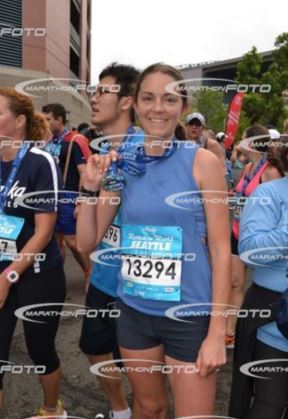 Happy to get my medal.

I spotted Bryan pretty quickly in the crowds but had to get my metal, my heat blanket and all of my post race snacks and drinks that they were handing me.  I finally caught up to Bryan and we shared times, hi-fives, and stories of the race.  It was right at this time that it started to rain, and started to rain hard.  We partially wanted to stay and explore the post-race concert and grounds but we were also sweaty, starting to get cold and didn’t want to be in the rain.  We walked to the ID and grabbed a cab ride home.

For nearly an hour after we got home we sat in front of the fire, drying out and warming up and with our feets elevated to the ceiling.  Then I was hungry, very hungry.  We picked up some mediocre at best (but I was too hungry to care) chicken shawarma sandwiches and a falafel salad.  We ate at home, drank a bunch of water, and shortly thereafter we were both asleep.  The rest of our day was spent not doing much.  We did work up enough energy to make a dish to bring to our friend, Anita’s, Asian-themed potluck party.  I ended up making a crispy sriracha chili cauliflower dish that won an unbeknowst-to-me cooking challenge at the party.  For winning I received a really awesome bottle of wine with a cute wine bottle cover from China. 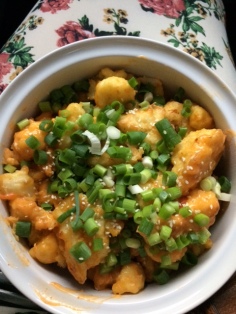 Winning sriracha cauliflower heading over to the party. 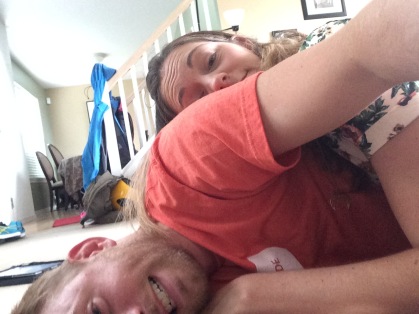 We somehow went from not being able to move…to party time.

I was feeling good and the food and drink made me feel better.  There was delicious cranberry mojitos and Chinese cane sugar spirits.  Then there was shumai, stirfrys, spicy tofu, fresh spring rolls, braised eggplant, and cucumber salads with peanuts.  Everything was delicious and I helped myself to plenty.  We also met some really cool people at Anita’s party that we conversed with until nearly 10 pm.  I didn’t even think we would last that late.  Anita broke out her slideshow from her recent travels to China, Hong Kong, and Vietnam and we had some mango ice cream for dessert.  Finally we had to call it a night, along with all the other guests.  Bryan and I shared a very big bowl of ice cream again when we got home and had some amazing sleep Saturday night!

Sunday night was a day of rest and relaxation.  We made it to church for a great service on the power of words.  After church and heading back home we walked in the gorgeous sunny skies to the last brunch EVER at Harvest Vine.  Coffee, two huevos a la flamenca, pan a la tomaquet, fried padron peppers, a vanilla cinnamon bun and a super custardy almond torte with pickled cherries made us happy customers.  I spent a grand total of 30 minutes on our chaise loungers in the sun on the back deck talking to Dad on Father’s Day.  Lounging was cut short because I had to get to my massage appointment back in Queen Anne.  Heaven on Earth!  By far the best massage I have ever received and an actual deep tissue sports massage to work out all of the pain and stress I did on my body the previous day.  I left feeling like royalty.  Bryan’s massage was next and his was just as good.  90 minutes spent letting someone else basically mutilate your body in the best way possible.

Sunday night was spent watching the NBA Finals, making a dinner of grilled chicken and a salad of avocado and mango, eating more ice cream and watching the first few episodes of the series The Americans.  Bryan and I are thinking that we could do it again and want to.  We both feel in great shape right now but I think we are also proud with how smart we trained for the Half.  Nothing showed that to us more than the last few miles of the half marathon when both of us were holding our pace steady and passing everyone around us.  We both even had so much in us left to sprint to the finish.  This shows in the results too when compared to all of the rest of the racers.