Our train rolls into the central Vienna train station just after 9 pm and after one subway ride we are at our hotel, the Arte Hotel Wien Stadthalle for the next three nights.  Check in went smoothly and we were soon in our next accommodation, a good sized room but lacking the character (and amenities) offered by Airbnbs.  We are pretty hungry by this point and so we set out for a short walk to Shillings restaurant down the street for our first Austrian meal.  This restaurant definitely seemed a bit like a locals hangout.  I got the wiener schnitzel and Bryan got the breaded meatballs.  The food was pretty quick to come out of the kitchen and again the plates were LARGE.  However, we were both hungry and easily demolished the food in front of us; including all of the potato and green salads because they were actually really delicious.  We were wiped from the traveling and headed back to the hotel for a good nights sleep.

Monday morning came around slowly and we took our time.  We decided to do the 2 pm free walking tour this time to allow ourselves to get a bite to eat and coffee beforehand and still be able to sleep in.  It was also Whit Monday, a local holiday, so many places and businesses we found were closed and people weren’t working.  It made for a slightly more peaceful, less touristy Vienna, for our first day exploring in it.  We headed towards the inner district and settled on a cafe to sit outside to get what we were looking for.  We each ordered cappuccinos (our go-to order for the two weeks), their mozzarella and tomato sandwich and the noteworthy apple strudel.  The apple strudel was amazingly delicious, my preference over apple pie with a light and crisp exterior dusted with powdered sugar and grated apples and raisins that made for a more creamy filling.

While at this cafe an American teaching English in Vienna for the past year, originally from San Diego, sat down next to us and we struck up a conversation with her.  Again, it was enlightening to get her take on Vienna, living abroad and recommendations.  Ironically, she also went to grad school at University of Michigan but found it too hard (shocker!).  The conversation went longer than we expected and we ran out of time to find more food before our tour started.

Our tour began right at 2 pm and was led by the most dry and impersonal tour guide of the bunch, a native Austrian.  He led us for three hours around central Vienna, showcasing the architecture and the Vienna history.  We broke midway and Bryan was able to get his favorite beer of the trip; the Edelweiss.  We ended near the Danube and after the tour ended Bryan and I stopped in the Austrian chain restaurant called Vapiano.  This Italian-inspired restaurant has different stations where you go and order from the chefs what you want.  It reminded me somewhat of a ski resort cafeteria but the food was actually really good.  I tried an interesting shaved celery root salad with Parmesan, bacon, raisins, and a creamy dressing that was something I would not usually see in the States. 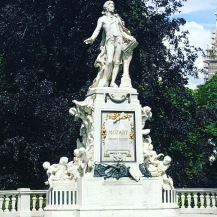 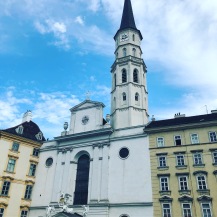 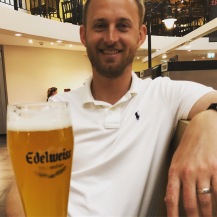 Highlight of Vienna for Bryan was this beer 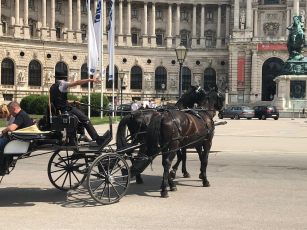 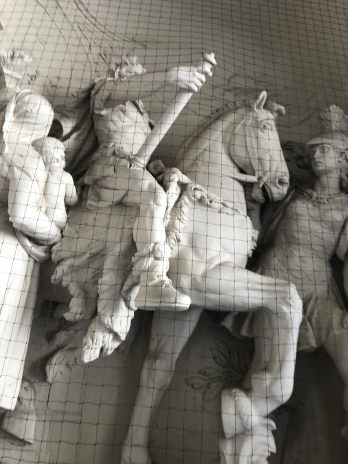 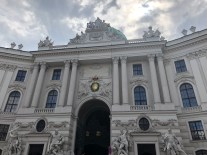 Cathedral getting a cleaning

Being that the opera house had just opened its doors for the standing room only tickets we thought we would buy these cheap, 3 Euro, tickets for the nights opera and stay however long we wanted.  However, after waiting in line for 15 minutes and getting right to the door, we were told we weren’t allowed in because Bryan was in nice khaki shorts.  Ludicrous!  We felt dejected and annoyed at the opera and Vienna in general.  We sat for a while not knowing what to do next and then decided to grab one of their City Bikes and explore the city parks by bike.  The first hour on the bikes are free, every time (!), and we headed towards the expansive Prater Park.  We biked the whole stretch of the central avenue of the park.  We thought we would return along the river but you really can’t by bike so we took an interesting detour home.  We stopped by to see the Belvedere (once a mansion for the Hapsburg Empire and now an art museum). 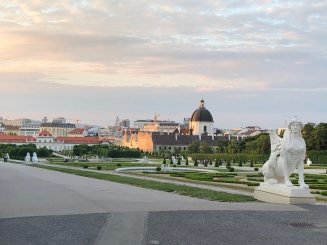 The grounds of the Belvedere

We got home, showered and then headed to the local laundry mat.  Once we got the laundry started I walked down the street to pick up two super cheap kabobs for us to eat for dinner.  These ones were just a few blocks away and the most highly rated in the city and they were good and filling for $4.  The laundromat was an adventure but we managed what we needed to; to have enough clothes for the second week.  We carried our stuff back towards the hotel and stopped in the cafe around the block to try the sacher torte and for Bryan to get a beer.  We headed home with plans to head outside the city the next day. 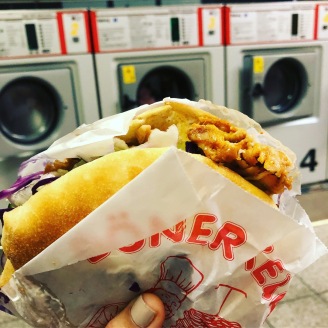 Kabobs in a laundromat? I say YES!

Tuesday morning we woke around 9 am and packed our backpack to head west to Melk, Austria by train.  We walked the short distance to the west train station, bought expensive train tickets, breakfast in form of a sandwich, cappuccinos, yogurt and fruit to eat on the train and hopped on board.  The train ride to Melk was just about an hour and was a nice way to wake up.  We arrived in Melk full, caffeinated and with full sun to enjoy.  We got the last two NextBikes at the train station in Melk and headed through the cute town and to the Danube.  We stayed on the south side of the Danube per Google’s recommendations that Bryan had read.  The ride was immediately enjoyable.  We had castle views, could see the quaint Austrian towns along the river, the large river cruise boats, and the path was so well marked and paved.

Bryan at first rest stop, one hour in to cycling

We were biking for about an hour before we had our first rest stop, which was a short one but these rental bikes are heavy.  We continued on with only a brief bathroom and water break for another 75 minutes or so and stopped in a cute little complex of different wineries. 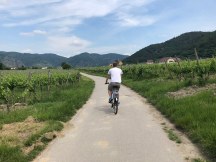 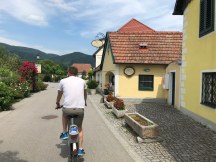 We checked the bikes in and started walking around, worried at first that nothing was open.  Then, just as we were walking by the doors to the garden patio of one of the wineries opened up and we both walked right in.  This place quickly filled up during our 90 minute break and it is no surprise why.  The wine (mostly whites) was crisp and refreshing (and cheap) and the food was delicious.  The garden patio was also super quaint and beautifully landscaped and the service was so nice.  Bryan got the caprese salad and I tried their asparagus, ham and egg salad with a yogurt dressing.  Both of us were brought out huge plates and fresh baked and warm rolls that were made locally in Durnstein.  The atmosphere, food and drink sent us to Heaven.  I was really wishing at this point I could order a glass of wine, and almost did. 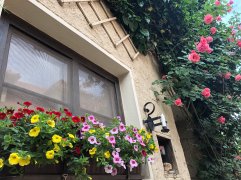 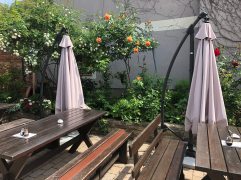 Food spread we were so excited about!

We didn’t really want to leave this quaint little place but after a long break we decided to continue on.  We had just about an hour left to Krems, where we were going to leave the bikes and take the train back to Vienna.  The last hour went quickly and after a short river crossing of the Danube we had hit Krems, a university town.  We stowed the bikes away and decided to hang out for awhile instead of catching the first train back to Vienna.  We walked to Danube and soaked our feet in the refreshing water.  I read some of my book and Bryan did I don’t know what.  After about an hour there, we walked back to the train station and got on the train back to Vienna where I actually took a quick snooze in the warm train. 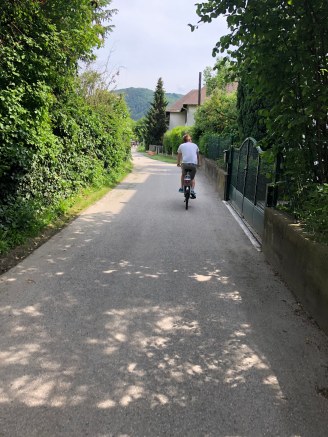 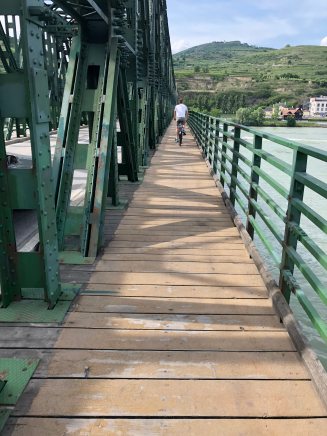 Biking across the Danube to Krems

Reading and soaking my feet in the river post bike ride

Back in Vienna, we made our way back to the hotel for showers before heading out for our last dinner in Vienna.  We went to Schnitzelwirt for their famously large and cheap variations of the schnitzel.  We sat outside and the temperature was just perfect.  I got the garlic schnitzel and Bryan the cordon blue, which we both shared.  We managed to eat it all and were so stuffed upon leaving.  The day had been a long and active one and we headed back to the hotel for a good nights sleep.

Schitzelwirt feast about to ensue 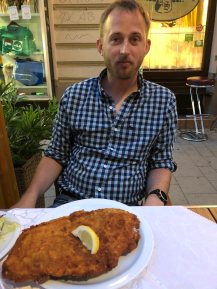 Wednesday came and we packed up our bags and left them with the front desk of the hotel.  I wanted to check out the local market that happens everyday since like the 17th century.  We walked/biked there and were running out of time before our bus to Budapest was about to leave.  We browsed the vendors, bought some of the locally famous fresh apricots but nothing else.  We each bought some food on our way back to the hotel, grabbed our bags and took the metro to the international bus station across town.  We were able to get a cappuccino and chocolate cake before boarding our Flixbus to Budapest.

The bus to Budapest went smoothly until we got near Budapest.  There had been a major auto wreck on their main bridge, which we were to cross.  And we literally went a half mile in 1.5 hours.  After such a long wait and no end in sight we got off the bus at the bus drivers permission and set out to our Airbnb by tram and bus.  That worked out well and 30 minutes later we were checking into our last stop of the trip.  We were both excited for Budapest!