I love summers so much for being able to spend time outdoors comfortably.  If I could take everything outdoors with me I could, and I try, for instance with dining, watching movies/Game of Thrones/Seahawks games, etc.  Summer officially seems to start here around the 4th of July (i.e. late) and we have tried to take advantage of the early summer weather this past week.

After our early doctor’s appointment on Tuesday afternoon, we spent happy hour on the Eastlake Bar and Grill patio soaking up the sun, the views of the boats on the water and enjoying burgers, fish and chips, and salad and all other things American.  We were ready for the midweek break that happens once in a blue moon.  We walked some of it off in Discovery Park, climbing to the top of the water tower for the first time ever (only in an effort to see if we would be able to watch the fireworks from up there but 8 months pregnant and with a full stomach I could have picked another day to climb to the top).

Wednesday was the 4th of July and we fully enjoyed our Wednesday off of work.  We woke up late, we worked out, we had our usual Saturday morning breakfast while watching my latest obsession (that would be banana pancakes and bacon and the documentary series The Staircase), and then we prepped a dish to bring over to David and Tina’s 4th of July/Housewarming Party.  They had delicious burgers and brats and there was a ton of other dishes, both sweet and savory, that were contributed by others.  The company was really enjoyable and we ended up not leaving until nearly 9 pm. It was a little too late to try to find somewhere to park and get in view of the fireworks and with work the next day we just went home and listened to the fireworks until the wee hours of the morning.

Although we didn’t have our usual Wednesday night childbirth class at Northwest Hospital this week because of the holiday we still headed up there for our hospital tour on Thursday (no FareStart this week because of the holiday).  We toured with two other couples and I swear we were the only two asking any questions.  It was good to see the rooms and know exactly what will be going down in a few weeks.  Even just sitting in the hospital room for 20 minutes though I could feel my blood pressure and anxiety rise.  Hopefully, I can utilize the hypnobirthing to calm my fears on the day.  After the tour, we tried to go to a taco place in Crown Hill but they were closed so we drove all the way south to Rainier Beach to King Philly Cheesesteaks, picked up two cheesesteaks and fries to take to Lake Washington Boulevard to have lakeside in the nice weather.  Gut bombs and amazingly messy and delicious, these cheesesteaks were the first good ones I have had in Seattle.  And they were good!

The weekend was restful and eventful and still largely spent outside.  Bryan went to hit golf balls at the driving range on Friday night with the boys so I had the night off and spent most of it on the deck.  On Saturday, we enjoyed brunch on the deck, after Bryan’s mens group at church, before slowly working in getting a lot of things fixed around the house.  We then lounged on the back deck for a while before grilling dinner and enjoying that on the deck as well.  We went for a walk post dinner to further enjoy the nice weather before finally heading inside.  And our Sunday Funday was mostly spent outside too.  Bryan had plans to go to Snoqualmie Golf Course for 18 holes of golf with some guys and I had a girls event for yoga and brunch on the rooftop.  Bryan enjoyed his golf outing and I enjoyed the views, sun and girl time at yoga and brunch.  We enjoyed a full hour of yoga flow before diving into homemade crepes, tortilla espanola, smoothies and cookies.  I got some bags of mulch and Lowe’s and spread those around the front and back beds before both of us met at home, relaxed on the back deck before showering enjoying a little dinner and TV time before another work week. 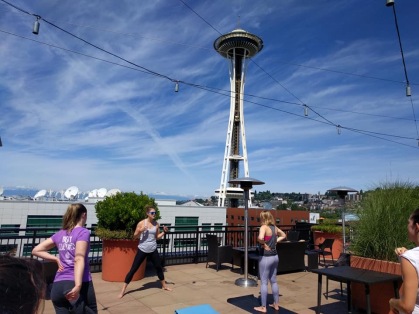 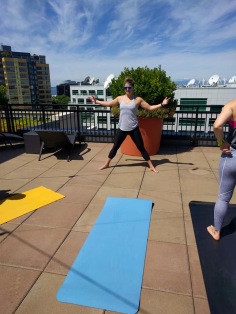 The weather forecast continues to be beautiful and I’m looking forward to this coming weekend with our parents coming into town.  I’m sure we will continue to spend as much time as we can outside.