Whoever said weekends are worse than weeks?  Yeah, I am saying that this spring.  After the doldrum and study fest of last weekend the past week felt like a genuine party.  I had something fun to look forward to each and every day.

The free cycle class at Riot Cycle at noon followed by an amazing leisurely lunch with Polly at the Bookstore Bar and Cafe thanks to mystery shopping.  Short day at work with a refresh mani-pedi session after work.    Then Bryan came home at the early hour of 1 am and we were both happy to see one another.

Busy day at work but also the tail end of the sunny weather we have been having so I stole away for a quick 40 minute jog along the waterfront around 4 pm.  Met Bryan, Billy, Val and Ainsley at Ivar’s Salmon House in North Lake Union for their annual birthday celebration with buy one get one entrees.  I think Bryan and I have managed to make it to this event most of the years we have been in Seattle and it really is a good deal and a nice treat.  Plus the sunny skies remained for the afternoon and led to a great sunset from our window-side table.  We both pretty much were exhausted after dinner though after having such a short night the night before.

First of four interviews for the intern that I am handpicking for the office in the morning.  A (cooked) sushi dinner my lonesome after some time studying after Girls Night was cancelled but then eager to spend the remainder of the evening with Bryan who I hadn’t gotten to spend solo time with in a while.

Another interview for the intern and then the usual FareStart night.  However, my main duties for the first half of the night involved watching the Michigan basketball Sweet Sixteen game against Texas A&M on my phone at the hostess stand.  It was a busy night but we had a lot of volunteers to help out, plus it helped that Michigan handedly won the game so I didn’t need to be so uber focused on the score and what was happening.  I stepped up my level of effort after the sweet victory and got back to work to finish out a smooth night with Rays Boathouse.  Bryan stayed late at work to finish up a presentation he had for work Friday morning but he came just before 9 pm to buy a dinner and eat with the rest of us.  It was a great dinner of curried mussels, beet salad with goat cheese, a delicious and unique take on surf and turf of panko breaded arctic char with pork belly with Asian greens and rice, and the densest chocolate flourless cake ever.

We didn’t have any real plans for Friday night which I honestly always look forward to.  Last round of interviews with two very strong candidates and my voice starting to go raspy.  Relaxing night at home with a Home Chef box dinner before starting the fun which is the weekend all over again.

Another 4-hour practice exam greeted me first thing in the morning while Bryan went to his men’s group at church.  I finished the exam around 2 pm with very mixed feelings on how the questions went.  Somber, Bryan was waking up from a nap and I was trying to shake off my nerves about the test.  We had a few hours before game time and we both needed some exercise so we did a 45-minute interval session together with the rowing machine and arm exercises.  After that and a shower we were ready for the Michigan vs. Florida State game with a snack of more spring rolls and a new-found energy.  It was an intense game and I was nervous the whole way through.  We struggled shooting but our defense was on their game.  We pulled out the victory, sending our team to the Final Four!  We made a late dinner after the game of another delicious Home Chef box meal of Korean pork noodles and watched Bladerunner.  Apparently my energy from the day was spent because I fell asleep pretty quick.

I at least had the morning off from studying.  We went to church, finishing off Colossians with table talk discussions.  After church we had a mystery shop lunch at Din Tai Fung, where we caught the Texas Tech game over dumplings.  Great lunch, unfortunate outcome of the game.  After lunch I had to perk up for another 4-hour practice exam.  I retreated with my books to the desk in the workout room this time.  While I spent 4-hours studying Bryan got so much stuff done around the house.  He started putting together the new dresser in the nursery around 5:30 pm and continued working on the elaborate construction of the dresser until 9 pm.  I was excited after doing fairly well on the practice exam to do some household chores myself and also kept myself busy until 9 pm.  We made another late dinner and spent the last hour of our weekend relaxing.  I was really proud of what all we got accomplished around the house this weekend and putting in another 10 hours or so of studying and practice exams.  I’ll be taking pictures of the progress we are making around the house when I get around to it (i.e. after my exam). 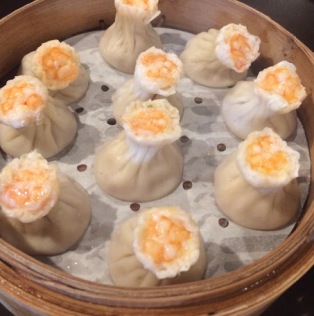 I love me some shu mai! 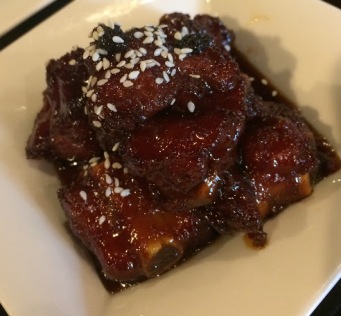 Trying their pork ribs for the first time.

Another week and a countdown of just 2.5 weeks before the test.