Another weekend that we went a little MIA was another jam-packed weekend that took us away from Seattle.  And by weekend, I mean more like 5 days worth of time away.  Bryan and I spent two nights and days with Andrew and Angela in San Francisco and followed that up with two nights in Bolinas, a funky little beach town 1.5 hours drive north of San Francisco with eight others from the FareStart network.  It was my first trip to Northern California and I thought San Francisco was quirky and fun, while the beach house was certainly low key and a retreat to get away from it all.

Bryan and I arrived in San Francisco without delays or issues around 7 pm.  We debated whether to take Uber or the Bart from the airport to downtown and decided on trying the local train system.  After a noisy ride in the dark and through tunnels (so we didn’t really get to see the city coming in) we disembarked in the middle of Union Square.  We walked for about 15 minutes through the very light misting rain to a cozy little corner restaurant in the Haight-Ashbury neighborhood called Mazzat, specializing in mezzes.  Bryan and I selected the huge mezze platter with our choice of three hot and three cold mezzes.  This was the perfect meal right off the plane and some of the best hummus we’ve had and some of the most memory-invoking mezzes from our trip to Turkey.  Full, we Ubered to the Fairmont in Ghiradelli Square to meet up with the Dodds at our super fancy three-bedroom suite.  After a glass of wine and conversation we all headed to bed.

Thursday morning started late for all of us as we chose to sleep in.  We dined on the hotel breakfast around their terrace fire pit.  Fresh berries and a fancy espresso machine were a hit and the fire was too cozy to want to leave.  But finally, we did.  We booked a last-minute sailing excursion in the harbor and made our way to the Pier to catch the boat and take in the very touristy sights and sounds.  Our 12:30 boat left on time and we had perfect winds for sailing.  We each received two glasses of beer or wine and we spent 90 minutes sailing towards the Golden Gate Bridge, around Alcatrez and back to the harbor. 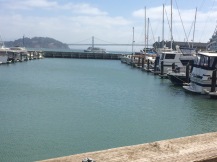 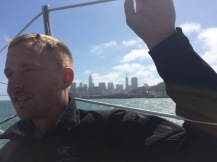 Once docked we split ways for the afternoon.  Bryan and I caught the street car that took us along the Embarcadero and waterfront.  It was good sightseeing and a cool street car.  We got off at the Ferry Terminal for a look around the building and the vendors.  Bryan bought a pork bun from one of the vendors and we decided to walk down Market Street towards Chinatown.  We went in circles trying to find a Chinese restaurant for lunch and finally found Sam Wo, which I guess was featured on Conan O’Brien’s show once per the episode they played on repeat inside the restaurant.  Bryan and I split a huge bowl of chicken chow fun and stir fried green beans which was filling and delicious.  We continued our walking and public-transit experience on above-ground and then under-ground buses before making our way up the inclined and curvy road to Twin Peaks.  Twin Peaks are aptly named and we very much enjoyed this ride to the top.  We got off the bus and had a few flights of stairs to climb to reach the top.  The views were amazing and winds were gusty.  We were both happy we made the journey up to get another perspective of the city. 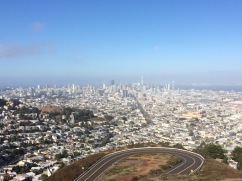 From atop Twin Peaks

We caught an Uber ride down to get to the very-popular State Birds Provisions restaurant in the Filmore District to be there when the restaurant opened at 5:30 pm for a walk-in table for us and the Dodds.  This we were able to successfully do, even with about 20 people already waiting outside the restaurant.  We were seated by friendly staff and were explained the concept of the restaurant; much like dim sum with carts of food brought around to the tables featuring specials of the night with their prices on them, in addition to the regular menu.  This was too exciting for me.  Everything that was wheeled around to us looked so appetizing.  We started pulling off items from the cart and the Dodds soon joined us at the table.  Our tasting quickly accelerated and before long we had tried:  the best heirloom tomatoes with a black tahini-chili oil, grilled octopus over gigante beans, oysters (just for the Dodds), smoked Japanese potato salad with soft-boiled egg, garlic bread with burrata cheese, some tasty pork ribs with black bean sauce and black garlic, guinea hen dumpling with broth, lamb tartare, summer squash and goat cheese toast, local anchovy-tomato toast, and the air-dried salt beef with pickled mushrooms.  Everything was fantastic and the ambiance was fun and energetic and not at all pretentious.  Good start to the night! 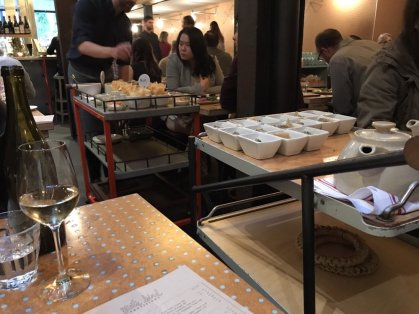 Dim sum carts are my favorite

The unassuming tomatoes might have been my favorite of the whole night!

We continued the night (being that there was still a lot of time to the night) at the Tonga Room in the other Fairmont hotel.  This was quirky and cheesy and we split a bowl among the four of us, one of which serves four with various rums that was delicious.  The band, on a boat in a pool in the middle of the room, started playing and we left soon after it started getting hopping.  We headed back to our Fairmont and settled into the rooftop terrace for drinking around the fire pit.  Everyone was feeling pretty loose before heading back to our room for bed.

Friday morning I was the only one feeling alright enough to go for a run, something I was really wanting to do while in San Francisco.  I woke up at 8 am to get a short 40-minute run, heading towards the Golden Gate Bridge via the waterfront parks offering nice paths.  Once back I showered and we enjoyed the breakfast once more around the fire.  We checked out of the hotel and stopped to pick up Italian sandwiches at Molinero’s in the North Beach (Italian) neighborhood, then stopping at Costco where we shopped for the beach house where we joined Timothy and Heather and then setting out on the 1.5-hour scenic drive, across the Golden Gate Bridge, through the curvy roads to Bolinas.

We arrived at the beach house around 2 pm where we unloaded the car and the groceries, checked out the accommodations and then settled into our sandwiches on the expansive deck.  We waited for some time before the others arrived and then Bryan and I were antsy to get in one of the kayaks.  We kayaked through the lagoon, passing the island filled with seals, almost running into a pelican, getting stuck a few times in the low tidal waters, and then returning against a strong current.  Everyone was now at the beach house and we broke open the booze and some started working on dinner.  Dinner was wonderful, some delicious baked pesto mussels that even Bryan and I loved, salmon, roasted potatoes and corn on the cob.  We continued the drinking and fun while playing Cards Against Humanity and then Jenga.  It was only midnight when everyone decided that it was time for sleep and we all headed to bed. 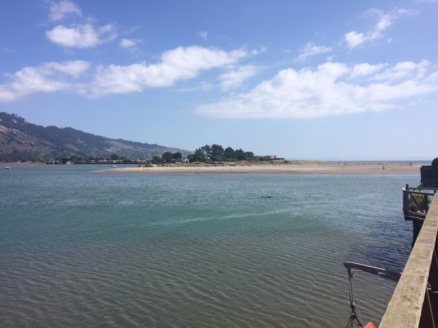 Views from the dock 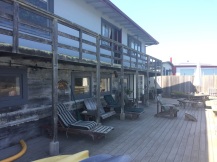 Saturday morning was another morning of sleeping in.  No sense waking up early with the Bay Area marine layer covering up the sun.  Once awake we found that our friends had made some coffee, put in the quiche and we dug into breakfast on the porch.  We spent a good amount of time waking up.  Internet had a poor connection the entire time so checking for scores of the Michigan game was not easy.  Once Michigan had sealed the win Bryan and I set out for a short run.  We took this through the tiny town of Bolinas, up to the cliffside road and through some interesting neighborhoods to an overlook on the coast.  We stopped for the views before heading back, coming in just under 5 (slow) miles.  We joined the gang for some lunch on the deck and then Bryan and I took out the kayaks again, this time trying out kayak surfing in the open water before coming back in to explore the channel through the town that was reminiscent of the channel in Leland.

Saturday night was a mix of Texas football and a fantastic dinner cooked by the gang again.  Texas was in a rematch with USC and fortunately it was on one of the few channels that we got in the house.  Bryan and I watched the whole game, fortunately our friends understood this and did all the cooking for us.  Sometime in the third corner we sat down for dinner of one of the best beef tenderloins of my life with a horseradish cream sauce and au jus, green beans, and a zucchini succotash.  Everything was delicious and kept us at the dinner table longer than we expected.  But we still had a game to finish watching and Texas was in it the whole time.  It was a nail biter right through the end of regulation and into overtime. Unfortunately, Texas didn’t come out with the “W” but it felt like they did being that they were certainly not predicted to win this year with a new coach and young team.  They looked good!  After the game, we set out for a walk to check out the Bolinas Saloon, where we didn’t stay long before heading back to the house while looking up at the stars.

Sunday morning was our last day in Bolinas and started much the same as the day before.  Coffee, quiche, yogurt and berries, best enjoyed outside on the deck.  Bryan and I took out the kayaks one more time, this time just the short distance to the end of the spit where we beached them and walked the two miles on the beach towards Stinson Beach and then the two miles back.  It was a lovely walk and the exercise and fresh air we needed before cheering on the Seahawks against the 49ers for a close win and then the drive back to San Francisco to check into our hotel by the airport for the night.  Bryan and I set out on foot to find dinner, ultimately deciding on a sushi restaurant with good Yelp reviews.  What drew us in was something easy on the stomach and with a TV screen we could see from the window showing the Sunday Night Football game.  We had some great sushi before walking back to the hotel, enjoying the hotel hot tub briefly and then hitting the hay for our early wakeup call and flight back to Seattle.

I really did enjoy San Francisco and am looking forward to going back sometime sooner rather than later.  I feel like we just touched the surface of what there is to do in the city.