This year’s half marathon training was not exactly as fun or as problem-free as last years (which was our first), it certainly had its highs and lows, but in the end we were both proud of how we raced and had fun (sort of) doing it.

This year’s race was unfortunately on a Sunday morning instead of a Saturday morning so we had the entire weekend to look forward to it.  We actually spent Friday night up at the Boeing in Everett for the Tauber Annual Alumni event, taking us on a tour of the final assembly plant and the new composite wing factory before sitting down to talk to two VPs at Boeing, whom both graduated from Michigan (one in Tauber and the other before Tauber existed).  Bryan came with, knowing one of the VPs names and we both enjoyed being in the company of two important execs and were impressed with their generosity in sharing their time and knowledge.  The head honcho even came to Mukilteo Lodge with us after the tour for the Tauber hosted happy hour.  After the impressive and insightful tour and happy hour eats and drinks Bryan and I headed home to begin our lounging time in preparation for Sunday’s race.

All that we really accomplished on Saturday was making pancakes, buying mulch and looking at grills at Lowes, stopping at four home open houses, picking up our race packets at the Expo, and then having a filling pasta dinner at home while trying to get to bed at a decent hour for our very early wake up call.

The 5 am alarm came soon enough and both of us were up and in motion.  We got dressed, made a light breakfast, packed some race snacks, filled up on water and coffee, put on our race numbers and headed out via scooter.  The race start was at Husky Stadium at the early hour of 6:30 am so fortunately that was an easy one for us to get to.  We scootered just south of the Montlake Bridge, walked/jogged to the gear check to check our bag, scarfed a banana, did a little stretching, surprisingly found Andrew without trying to wish him luck, and were in Corral 6 for the on-time start.

The first 8 miles of the race was very known territory for Bryan and I.  Running from Husky Stadium, through the Arboretum, before heading south along Lake Washington Boulevard, through Madrona, Leschi, past the I-90 bridge and then cutting west through Gennessee Park and Bryan and my first date location!  From there we were taking all the fuel they were passing out and were ready for the 3 mile slight uphill slog heading north on Rainier Avenue.  Uninteresting portion of the race in my opinion so I just tuned all sights and sounds out.  I also can’t really remember a band playing along this portion but maybe that was because all I could think about was that I was starting to lose energy and was ready to be done.  But I was looking forward to reaching Mile 11 and seeing Angela and the kids, whom even handed us our water.

From that point on we were in the home stretch, a nice break of a downward grade before finishing with a slight spiral loop up, then back down for our sprint to the finish.  Bryan and I managed an average pace of 8:30 minutes/mile with a screamer the last mile of the race.  Just the way to do it.  My goal was a stretch at 1:55 and we ended up coming in at 1:51 so I couldn’t be happier with how we performed.  Bryan and I came in 1135 and 1136 place out of the 10,760 half marathoners (just short of the top 10%) and I came in 61 out of 1,112 people in my division (just short of the top 5% for females between 30-34…I’m guessing). 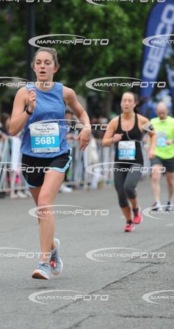 Race to the finish line. 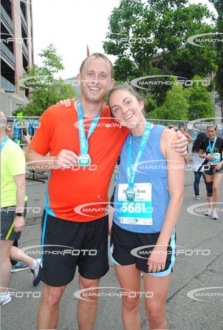 Post race, both Bryan and I were a bit woozy getting our medals and all of the drinks and food being handed out at the finish line, despite having a bunch of fuel and water along the race.  We found a place to sit and stretch and we both immediately got pretty stiff.  With all of our snacks and our gear we made the short walk to the light rail to catch the train back up to the UW to get the scooter.  This worked out pretty well and were soon back home where we both took nice long baths in epson salt to soothe sore muscles and warm our bodies back up (it was only a high of about 60 through the time we finished the race) and melted into the couches until we heard word about Andrew’s finish of the full marathon.

We headed over to the Dodd’s for a post-race breakfast that Angela made us of a great pepper, potatoes, sausage and bacon hash with fried eggs, fruit salad, and mimosas.  My body was quite pleased with everything and afterwards we headed home to let Andrew sleep.  We spent the rest of the day incapacitated on the couch, I had a great talk with Dad and Grandaddy for Father’s Day, watched the movie Gold, made another meal of pasta and enjoyed a big bowl of ice cream to celebrate.  My body enjoyed every minute of sleep Sunday night.

Monday was a bit rough waking up, walking from the bus stop, and simply working.  But evening came around and the four of us met back up at The Capital Grille for a mystery shop dinner for four (simply unheard of), sharing calamari and a $100 bottle of wine and each savoring a delicious and expensive steak as a reward.  My 14 oz New York Strip au poivre with a cognac cream sauce was mouthwatering and I balanced it out with all the great roasted veggies around the table.  I think I ate most of the flourless chocolate cake, no surprise there, so I was stopped upon leaving dinner.  A very rewarding night after our race.