…is what this post should be called.  Bryan’s had to work some serious hours lately and has put in a lot of work that is exciting but also tiring for him.  He’s been up and out of the house early in the morning to get to work by 5 am!  Me, well, it’s been same old same old here but have now added on responsibility of watching a house that is not mine and walking and feeding dogs that are not mine.  I keep myself busy but am looking forward to when Bryan’s schedule frees up and we are back home.

Bryan and I were able to share an excellent (!) meal for Seattle Restaurant Week at the nearby Vendemmia last week.  Our menu was dynamite with appetizers for the table of ahi crudo with grapefruit, potato bisque, a beet salad with apple and fennel, bruschetta with porchetta and fig, and roasted cauliflower with chickpeas, currants and mint.  All of the starters began the meal great from the beginning.  For entrees Bryan had the New York steak with roasted fingerlings and wild mushrooms and a nettle sauce and I had some exceptional sea scallops with peas, white beans and bacon.  Our desserts included the amaretto gelato with chocolate cookie and chocolate sauce and a lemon olive oil cake with hazelnut and meringue.  We also shared the wine pairing trio.  Our meal was literally the best one in weeks! 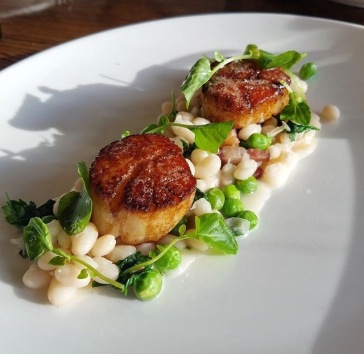 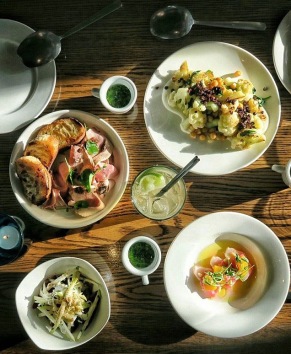 All great appetizers for the table.

Last Wednesday night was a full evening.  I enjoyed the community dinner at FareStart before heading over to Ewelina’s birthday party at the Masonry for a drink and ending the night with a dress rehearsal for the new immersive theater production called Here Lies Love at the Seattle Rep with Polly and Ryuhei.  Bryan also attended Ewelina’s birthday party later in the night so we just missed each other.  And Thursday I was back at FareStart for the chef of the Seattle Yacht Club.  Luis and Carina were dining in with the gift card that they won from our super bowl party last year and Bryan dined in solo and was the “most popular guy in the room” according to my volunteer who didn’t know he was my husband.  And he enjoyed his meal, the uber creamy and rich leek and yukon gold potato soup with a bunch of lump dungeness crab and pine nuts, the lamb loin with fava beans, peas and morel mushrooms, and the brown butter almond cake with berries, almond brittle and cream.

Friday came just in time and with it I was in the main office for the day and for the monthly staff meeting.  Bryan and I had a low key night Friday night for us both to rest and recover from the weeks but also because was back in work by 5 am on Saturday.  While Bryan worked on Saturday I did some household chores before getting a facial I bought on Groupon from this place I really, really loved and went for my long run of the weekend, a 6-mile out and back to the Husky Stadium.  Sunday the rain finally went away so I was able to get outside and do some more gardening.  I weeded all of the front yard and spread one bag of mulch that I have hung onto since last year (oh boy!) and realize that I need about six more bags to finish the job in the front yard alone.  Then I headed over to the Dodd’s to let the dogs out.

This week has felt like one long dog walking, ball throwing, slobbery mess.  I’m just not used to it at all and having even this one extra responsibility on my (our) lap is stressful.  I’ve walked them in the morning before work (Bryan walked them this morning), have gotten myself to work since Bryan leaves early and I’m not doing the carpool this week, and then try to get back after work early enough to let them out before spending a good hour walking them and playing at the dog park before heading home, feeding them, and cleaning up after them.  Thus that is how the week has gone.

I smartly ordered a Blue Apron shipment that worked well preparing dinners while at the Dodd’s three nights in a row.  All were quite tasty, particularly the cheese stuffed pork chops with the tomato pepper sauce that was reminiscent of mom’s pizza chicken we had so frequently as kids.  Last night we skirted over to our Novelty Hill quarterly wine party for some delicious eats and pours of wine, sat outside by the fire, and met another friendly couple.

I have Hipcooks tonight and FareStart tomorrow night so already planning on getting a walk/run in with the dogs before getting to each event.  READY FOR THE WEEKEND AND OUR HOUSE!!  I have a new appreciation for our house, in all of it’s quiet and all of it’s comfort, and all that is mine/ours.