What an epic weekend we had skiing in Salt Lake City with friends.  Sun, sunburns, chapped lips, a few epic falls, gusty winds, hot tub, brewskis, Mexican food and so much more.  Bryan and I both needed this trip bad and both of us felt refreshed but with tired legs returning back to Seattle.

We got in on Thursday night and one member of the group had already checked into the house.  Tim picked us up in his rental and let us pick up some super delicious eats from the nearby Spitz Mediterranean to take back to the rental house.  Bryan and I felt much better after eating and awaited the rest of the group’s arrival which came around 11 pm.  We caught up with them for a while before heading to bed to get some R&R. 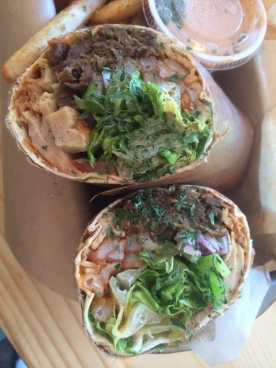 Somehow managed to make a plate of all of my favorites; hummus, fried pita, chicken shwarama, fattoush, fried chickpeas, and fries and sweet potato waffle fries!!!

Friday morning we were all up and at em early in the morning to fuel up with breakfast and coffee before making the short trek to Alta.  We were in line both Friday and Saturday before the lifts opened and skied until the lifts closed.  Friday was perfect; no winds, sunny beautiful blue skies, we had lunch outside in our t-shirts at the base of the mountain.  We found some good terrain and mostly stuck to Alta both days.  Saturday the winds picked up and were quite gusty for most of the day but we find some enclaves in the trees, doing the short hike up to Catherine’s area, traversing three times to a bowl with some great powder, and generally enjoying each other’s company. 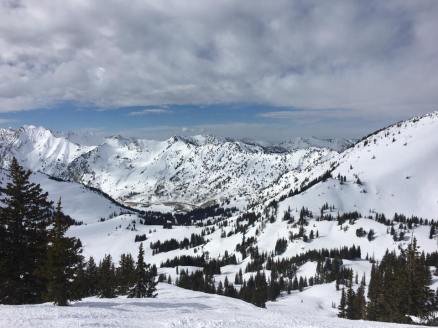 View from the top

SLC in the not so far distance 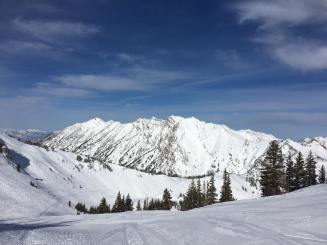 We spent Friday night in, making a spaghetti dinner for everyone that was pretty much licked clean.  Saturday night we all piled into the 8-seater Expedition we rented with me in the driver’s seat with a bunch of drunkos in the back to make the short trek into the city (kind of) to eat at the highly rated and reviewed Mexican Restaurant, Red Iguana.  I had to make a reservation for the 8 of us the night before and it was the only reservation still available for the weekend.  We arrived, were provided sampler platters of their 8 moles and soon ordered our dinner.  We were sung to by a mariachi band while we wait patiently for our food.  Dinner came quickly and boy was it delicious.  Bryan says they had the best salsa ever and 8 different moles (all delicious) is also unheard of.  I know where we must eat at for every future trip to SLC. 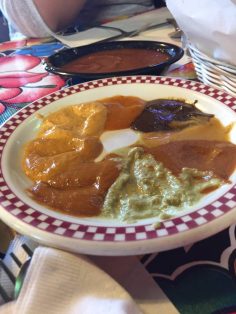 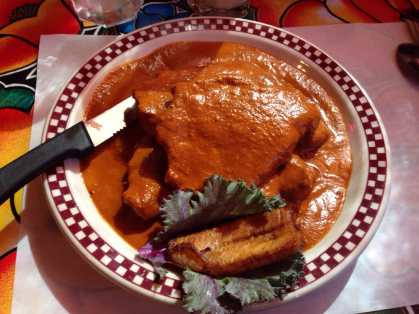 Sunday morning were were slow to get going and had to pack up and clean up some.  We still managed to get to the lift before 10 am and decided to try out the adjoining ski resort, Snowbird, for the day.  Winds were again high but fortunately the sun came out of hiding in the afternoon again. We didn’t have as big of a day as the two previous but still got our money in skiing.  We said goodbye to Amy around 1pm and then Bryan and I were dropped off at the airport around 4:30 pm for our 6:30 pm flight.  We got out of town in the nick of time as a storm was brewing and our friends, who fly out 2 hours later, had their flight delayed by 3 hours, yuck!  We made it back to Seattle without a glitch.  The short 2 hour flight was easy peasy, we shuttled to the Jeep, packed in the gear, picked up Pad Kee Maos from the local Thai joint and passed out as quick as we could.

Epic traverse with us as dots on the mountain

That would be me in the front

Skiing over to Bryan

The tunnel that connects Snowbird front side to back side.

Bryan and I will definitely be back to ski in SLC, sooner rather than later I think.  Easy to get there, great mountain to ski, skiers only (no boarders), and great food.