This weekend was the first weekend that really felt like we were actually moving into the holiday season.  Late last week decorations were going up around town and Friday night was the annual Figgy Pudding Carroling Competition that I stumbled upon as I was leaving work.  Temperatures dropped and even Monday morning greeted us with giant snowflakes that was beautiful to watch but didn’t last long at all. 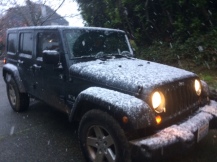 …and Bryan is ready to go before our street gets slick.

After working late on Friday I grabbed a quick bite at Buffalo Wild Wings to catch a small part of the UW vs. Colorado game before heading to the Cathedrals concert at St. Mark’s Cathedral that was sold out, including standing room only.  Meanwhile Bryan grabbed pizza and beers with the Dodds and Jason before heading home to finish watching the game.

Saturday was our usually lazy morning, not waking up until 10:30 am.  It was cool but rain-free so after a lazy morning we did our usual route around Seward Park.  Once home I prepped a dish to take to Anita’s Holiday Party.  The party was a cocktail party and we talked with the Dodds and Anita until fairly late.

Sunday morning we headed up to Lynnwood for Philipp’s birthday brunch hosted by Philipp’s parents.  I wasn’t really sure what to expect but I was amazed at how good their brunch spread was.  Served buffet style but beautiful we helped ourselves to:  hard boiled eggs, rye bread, baguette, dips, meatballs with tzatziki sauce, sausage with curry ketchup, deli meats and a full cheese platter, crudites, two potato salads, a lentil salad and strawberry tarts with homemade whipped cream plus coffee and mimosas.  Everything was so good and so high quality.

After staying for some time catching up with the crew Bryan and I headed out to Goodwill to drop off things and then to Farmer Brown’s Tree Farm to U-Cut our first tree ever.  Neither of us knew what we were getting ourselves into and after waiting in a long line of cars, finally finding a parking spot, and then scouring the vast farm in the slim pickings we finally compromised on a tree.  Bryan sawed it in no time and we carried it to throw in the Jeep.  We made the hour drive back to Seattle just in time for the Seahawk’s SNF game against the Panthers.  We waited until half time to put the tree up and once erected I think we were actually very pleasantly surprised at what a good tree we picked out.  After the easy win (what really did happen in Tampa?) I finished the tree with the lights, ribbon, and new decorations we got.  Bryan topped the tree with the star and the rest of the night we watched TV in the glow of the tree lights.

Decorations up while Bryan makes me watch the movie Angry Birds

I cannot believe how soon Christmas is coming up.  It really snuck up on me this year and I’m only finally starting to accept the fact that its already here.