My 30th birthday weekend was a hit.  We had a great time in sunny Los Angeles with tons to do.  It was nice taking the Friday off and treating ourselves to a long weekend.  We grabbed a bite to eat in Columbia City on our way to the airport on Thursday night and caught our flight to L.A. without a problem.  With an hour delay we got into the airport around 12:30 am and easily found our room for the night close to the hotel.  It was a fun spot to be, reminding me fondly of the motel in National Lampoon’s Vacation. 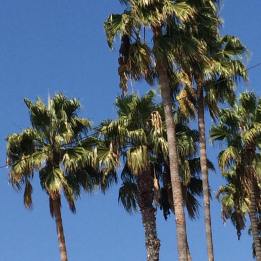 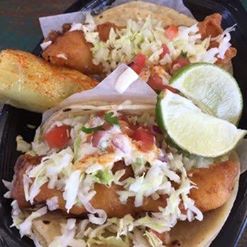 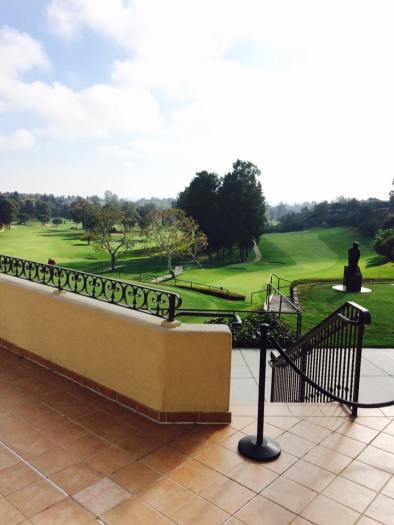 My birthday morning arrived soon enough and we took our time waking up from such a late night to bed.  Once ready to set out for the day we walked the short distance to our rental car, hopped into our Dodge Charger for the weekend, finished packing up, and set out a short distance south to eat the beloved fish tacos we had before at Baja California Fish Tacos.  We shared six tacos for lunch and were stuffed and happy now heading north to Santa Monica to check into our new digs for the weekend.  We had 1 pm tennis court reservations at the Riviera Country Club and after checking in, selecting our demo racquets, we were on the court to play a friendly match.  It was perfect weather for playing and it was really fun to get out there and play, something we haven’t done in over a year! 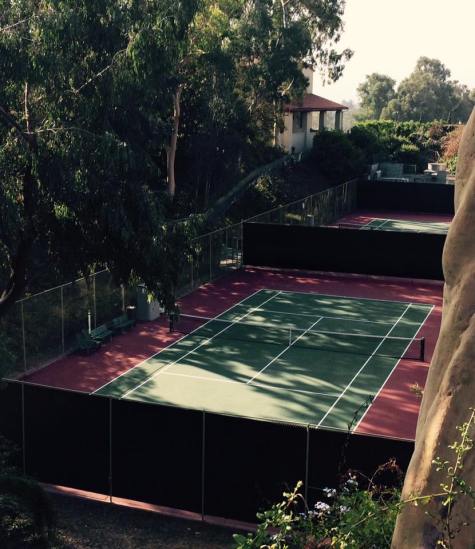 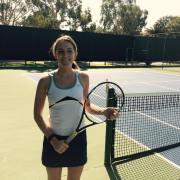 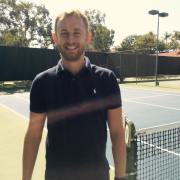 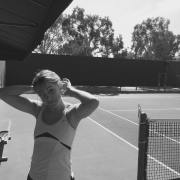 Now that we were good and sweaty we checked into our room, overlooking the prestigious 18th hole and with views of the ocean it was bright and sunny.  We cleaned up and relaxed a bit before exploring the pro shop, buying Bryan a new shirt, and then getting a drink at the bar.  Once energized we set out towards West Hollywood in the Friday rush hour traffic but we were at peace and taking in the sights.  We had plans for getting dinner at Carousel, an Armenian/Lebanese restaurant in Little Armenia that allowed you to BYOB, which was perfect since the hotel had gifted us a bottle of wine.  With our wine we chose to share the vegetarian platter and chicken shwarma with hummus.  This was some of the very best middleeastern food I have ever had, if not the best.  Shwarma, hummus, tabbouli, fattoush, cabbage salad, baba ganoush, mujaharra, and the right kind of pita bread.  Bryan and I both were very happy campers and stuffed to the gills on a very low budget. 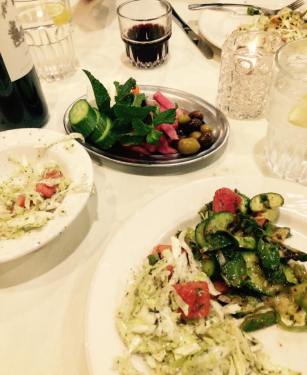 Food of the gods 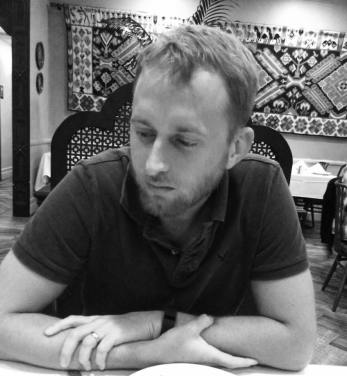 We drove the short distance to the park and ride to catch the shuttle to the Greek Theater.  We got to the venue during the second act which was enjoyable to watch and the songs were recognizable.  There was a short break in acts and then Fitz and the Tantrums came out and the show was on.  Like all of their concerts it was so much fun to watch and a blast to dance to.  Extremely positive while still being moody songs.  Definitely as close as you can get these days to Motown and I’m having a difficult time thinking of too many other bands that include lead singers that are both white and black.  Can you?  I love these guys and even when they came out with Hand Clap and the Walker with the USC marching band on stage we could forgive them.  It was a great show and ended with confetti.  We waited some time for the shuttle and then made our way back to the hotel, stopping for night time snacks on the way. 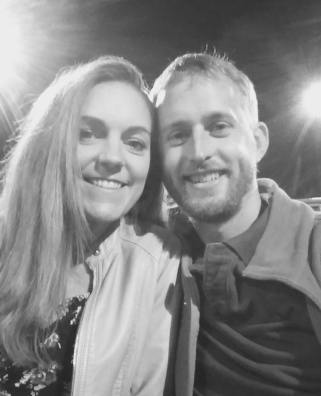 Ready for the show to start. 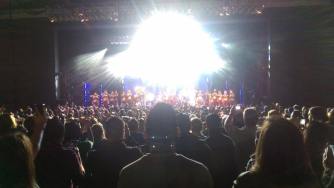 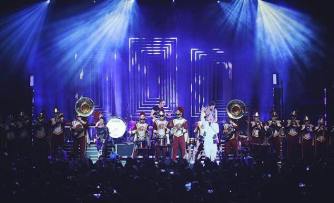 Saturday morning we woke at 8 am to get moving to get on the road for our day at Six Flags Magic Mountain.  After changing we went to the Dining Room for breakfast which was chaos with a hosted brunch buffet going on for a benefit that they were holding.  After filling up and fueling up with coffee we hit the road and in 40 minutes we were the park.  From 11 am until after 10 pm Bryan and I were riding ride after ride.  Bryan smartly purchased the Flash Pass which got us in and out of the rides quickly and we were able to knock out all of the rides by about 4 pm.  We were having such a good time, enjoying all the best coasters, even getting soaked through our undies in the one water ride.  We shared a lemon icee mid morning and finally got plates of barbecue around 6 pm.  After getting sweatshirts from the car we were back in the park to ride three more coasters.  It was tough to leave because we were enjoying the Fright Fest themed park in the dark so much.  I was quite literally scared to death of the zombies and other monsters dressed up to scare guests.  But once we left we could both feel how tired we were.  We stopped at Starbucks so I could change and use my birthday freebie for a delicious salted caramel Frappecino and showered and slumbered back at the hotel. 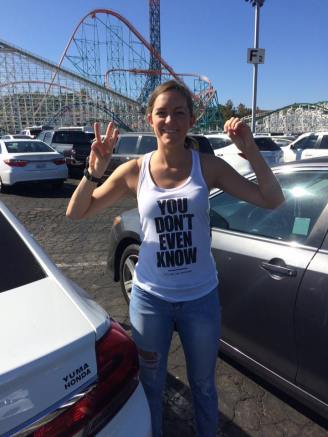 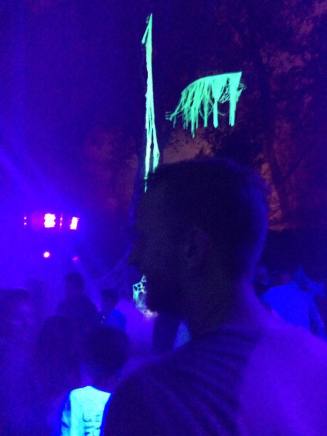 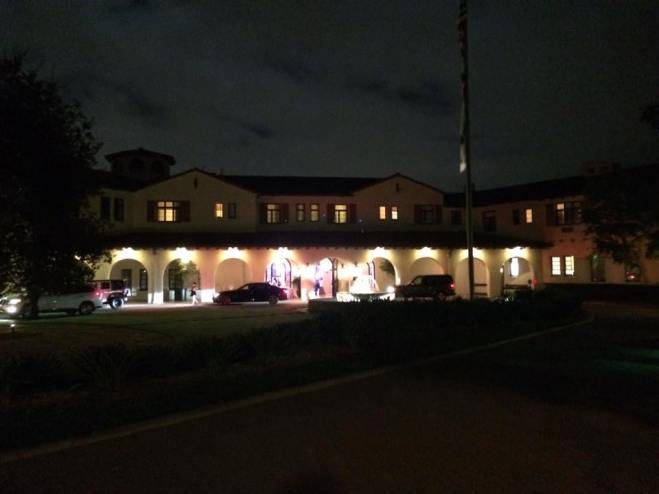 Returning to our pad

We had an early morning check out at the hotel, returned our car, and made our way to the airport in no time.  Our 10:20 am flight was on time and got us home in time to not miss much of the first quarter of the Seahawks vs. Falcons game.  We thankfully got a win which helped to complete a great weekend.  I would turn 30 again if I could celebrate the weekend all over again.  Unfortunately I think I am only mentally capable of turning 30 once.  At least it was a good one.