So for Labor Day weekend we spent the long weekend retreating to the Oregon Coast.  It was my first time and Bryan’s second and our first time to Cape Meares and Polly’s family’s beach house.  We left in a mild rush Friday around 3 pm from work to try to beat traffic.  Fortunately, traffic wasn’t all too bad on the way south.  We stopped for burgers and shakes from Burgerville and a bathroom and gas stop and got to the house in the dark around 9 pm.  We unloaded the car and took in as much of the surroundings as we could in the dark…you could hear the waves crashing, you could see the stars much better and we found our bedroom for the three nights.  The cottage was nice and spacious with an excellent kitchen and high ceilings in the living room.  We stayed up talking and then watching Strange Brew before heading to bed.

Saturday morning we slept in and woke up to find a note to The Millers that the other two were already down at the beach.  Bryan and I headed out in the mist and me still in my PJs to go walk the beach.  The misting stopped and the clouds cleared out leading to a wonderfully sunny day.  The beach was beautiful.  A long flat beach but surrounded with some massive cliffs.  Good size waves and a sand bar to walk along.  We spent some time taking it all in before heading back and making bacon, eggs and pancakes together at the early hour of 11:30 am.  Bryan and I set out for a long run along the spit which was actually a great run; mostly completely flat, water views on both sides, a nice breeze and not too hot.  We planned somewhere between 8 and 9 miles but were feeling okay and wanted to run to the end of the spit, which we did, before turning back.  We saw two snakes, one alive and one dead, on the way back and we finished the run at 11 miles.  It felt good to end at the beach and soak our feet in the chilly Pacific waters.  Polly and Ryuhei were sitting at the beach enjoying the views where we joined them for a bit before showering and heading out for some sightseeing. 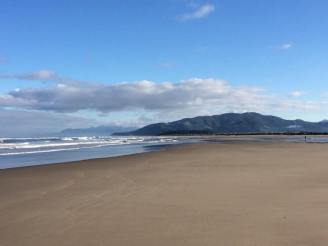 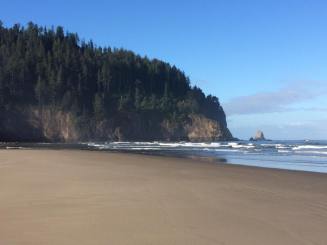 Saturday afternoon the four of us visited some local Tillamook treasures.  We first stopped at Blue Heron to try all of their samples; dips, mustard, jams, brie, BBQ sauces, and finally we each purchased a 5-glass wine flight to share as a couple.  After some time sitting and tasting we left and set out for Tillamook Cheese Factory, easily the most touristed place in Tillamook.  And it was busy!  We walked around the factory to see what we could in the cheese-making process.  We then headed for the cheese samples, breezed through the shops and Bryan and I beelined for the ice cream line.  While it was long we got in and out pretty quickly, sampling the cookie dough and the very good salted caramel Oregon hazelnut flavors.  Polly got in line much later and was in line for a very long time.  By the time we left the cheese shop it was already 7:30 so we headed to Fred Meyers to grab some food for dinner and headed back home.  We tag teamed dinner duties.  Bryan made two beer can chickens.  Ryuhei made some fantastic curry cauliflower.  I chopped up a salad and Polly made me some homemade croutons.  We watched Rat Race while making dinner and while we ate our plentiful dinner and ended up in bed not much later stuffed and happy.

Inside the cheese factory

And of course samples of cheese

Sunday morning it was us that were the first ones up.  We made some coffee before heading to the beach to try to find some razor clams.  Unfortunately, no clams were found and only those gross sand crabs were what we dug up.  It was still nice to walk along the beach and this morning it was very sunny. 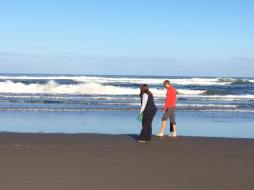 But there are rocks to throw and seagulls to hit.

We all headed back to the house to make an egg scramble and fruit salad and watched Maverick.  After the great movie Bryan and I soaked up some sun on the deck while doing Sodukos.  We served up some leftover BBQ chicken sandwiches and salad before heading south down the coast to go watch the Texas game.

Oregon rocks in the ocean

We first stopped at Pelican Pub in Pacific City but the place was packed and it was hard to get spots to see the game so we left the Pub and headed to a much darker sports bar where we found seats right away in front of the TV.  I got a Black Butte Porter and the captains platter of a bunch of fried seafood and waffle fries and relaxed into the 4+ hour exciting game of Texas vs. Notre Dame.  Shockingly, Texas came out victorious and Bryan was a happy camper.  We headed back home before quickly going to bed.

Monday morning we woke to Ryuhei making us a leftovers fritatta and fruit salad which we ate before washing the bedding and cleaning up the cottage to get it ready for us to leave.  We left the cottage right around 11:30 am and decided to take the long way up the Coast via 101.  We saw Seaside and stopped at Hug Point to walk along the beach and get our feet in the water.  We continued driving to super cute Cannon Beach where we stopped for lunch, coffees and salt water taffy.  This was a picturesque beach town that I really liked.  We continued on through Astoria before crossing over the Columbia River into Washington.  From there it was a long drive with Mindy Kalin’s audiobook on.  We didn’t pull into home until 7:30 pm.  Bryan and I stretched our legs and relaxed a bit before making one more of our Hello Fresh dinners.  This one was a winner and something I would definitely make again!!!  Italian meatloaf with rosemary garlic mashed potatoes and green beans (which I added chanterelles to).  It was super tasty and we were happy to be back home and watching Stranger Things on the couch together.

Great long weekend away and nice knowing that it is a short week.