For this past weekend Bryan and I spent two nights at Chad’s brand new digs to see his town, meet his friends and girlfriend, and also get a quick visit with Mom and Dad.

The initial plan was to head to the airport right after FareStart on Thursday night to catch a 1 am flight with Frontier so that we could make it into Chicago for a day game at Wrigley Field to watch the Cubs vs. Nationals.  However, first our flight was delayed and then it was delayed more and then it was flat out canceled due to a cracked windshield.  So there we were at 2:30 in the morning, stranded at the airport with no flight to Chicago and a long line to get a refund for the flight.  Frustration was immediate and sleepiness was still lingering.  Bryan found a new direct flight on United that left at 6 am for Chicago so we quickly booked that and proceeded to re-check our bag again with United.  And then we had to go through security again, which the first time was manageable, but this time was a shear nightmare.  It took nearly an hour but then we were at our boarding gate and I passed out on the bench.  And then passed out again on the flight, the whole flight to Chicago.

So our trip was off to an interesting start but by noon Chicago-time we were in the O’hare airport, grabbed our bag and hopped on the Blue Line to make our way toward Wrigley.  This trip took a little time as well as the traffic around the game was logically horrendous.  We finally made it to our stop right after game time, dropped off our suitcase at a bar via recommendation by Chad, and then headed into the Bleacher seats to find Chad and Gabe.  We found them and the rest of the game was relaxing, hot, sunny, and wildly entertaining with several runs scored and the Cubs still winning.  We even had quite a few home runs that were sent straight to our section.  Midway through the game Bryan and I each got a different hotdog from Hot Dougs, both which were amazing.  Mine was a jalapeno chicken sausage with jalapeno mustard and pico de gallo and it was incredibly delicious.

After the game, we set forth to Chad’s abode, again through the traffic and getting in a little later than expected.  After tours of his place, showers, and freshening up, we headed out on foot to Feast, to dine on their patio for dinner.  Gabe, my friend Chiara and Chad’s girlfriend Jaime joined us for dinner.  It was my first introduction to Jaime and we all greatly enjoyed our meal on the patio.  The weather was just awesome on Friday.  After dinner we hopped in an Uber and headed to Chad’s old roommate’s going away party where we pretended we could handle a house party for a few hours.  Thankful for at least picking up some good wine at the store beforehand.  I greatly enjoyed spending time with Chiara again too and am so thankful we got to see her again.

Saturday morning was a very late start for all of us.  We woke to some crazy gusty wind and only slightly a hangover.  We had some snacks, Bryan picked us up a coffee, and finally a little after noon Bryan and I set out for our 9-mile training run on the very cool 606 elevated trail not far from Chad’s apartment.  The run started off rough with little energy and gusty winds but by the time we got to the 606 the wind died down, the sun was out and the trail was super cool.  In total I think Bryan and I ran about 6 miles on the trail and aside from me colliding head on with a cyclist it was a great and successful run.  Bryan ran 10 total and I ran 9.4.  I have some cuts and bruises to show for it too!

Once our run was over we were ready to get the rest of the day started.  Bryan, Chad and I walked to Wicker Park to eat at Big Star Tacos, again on the patio and with a pitcher of margaritas.  Their tacos were extremely delicious, best food I had all weekend!  I tried the pescado and the al pastor and both were great but I think all of us really preferred the fish overall.  We then strolled the neighborhood, checking out some shops, and strolling down Milwaukee Avenue until the next thing we knew we were downtown and headed straight for the Boeing headquarters building right on the river.  It was a fun thing to see and definitely in a good location.  We caught a ride back to Chad’s place to nap and relax and then get ready for dinner back in downtown.  We had reservations at a swank Peruvian restaurant called Tanta with just Chad and Jaime.  We got a great bottle of white wine to start and ordered some ceviche, grilled octopus on a bed of mashed potatoes, some great shrimp and chicken fried rice and plantain chips.  It wasn’t a ton of food but it was delicious.  We moved on to another cocktail bar where Jaime knew one of the bartenders and we all got a round of Old Fashioneds on the house, followed by another round of drinks and then it was time for us to call it quits, around 2 am.

Tasty tacos for the table. 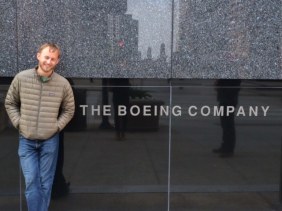 We made it to Boeing!

Ready to mix up the fried rice at Tanta.

Sunday’s sleep could have lasted all day.  We definitely woke up groggy but were fresh and ready to go when Mom and Dad (and Sophie) pulled up to head out to a Mother’s Day brunch with us.  It was a beautiful day and we again had brunch on the patio at a place called Kaiser Tiger, specializing in beer, brats and bacon?!?  The food was good and definitely had the focus on bacon and beer.  After quite a time in the sun talking we headed to the lakeshore to free Sophie and went on a long walk all along the lake.  It was nice to stretch our legs and continue talking.  Before we knew it we had to head back to Chad’s to grab our luggage and Mom and Dad dropped us off at the Blue Line to head back to O’hare.  It was so nice to be able to see them for Mother’s Day Weekend.  We made it to O’hare fine but then the security line in all of the terminals were absolutely obscene.  Like officially the worst I have ever even imagined.  It took forever to get through but we were there plenty early and picked up some food to go from Wolfgang Pucks (mystery shopping) and were safely at our gate to enjoy it before boarding.  The plane waited at the gate about 30 minutes past the departure time, knowing that so many passengers were stuck in security.  We still made it to Seattle safely and on time.  Bryan and I booked it to catch the light rail with seconds left and were home and in bed by 11:30 pm.

I am extremely exhausted today and certainly feel old.  Chad is a fun but hard one to keep up with.  Chicago has awesome night life, food and drink and just a general laid back vibe.  Still after a weekend of boozing it up its sort of peaceful to be back in the almost sleepy Seattle.  So glad I had this opportunity to go out and see a lot of my favorite people.  No regrets at all!  And now we have an exchange guest to enjoy for the next few weeks.