I had such an amazing food-filled weekend in Seattle.  On Saturday I was invited to a Yelp Elite event of pure grandness at the legendary Ray’s Boathouse in the Ballard neighborhood right on the Puget Sound.  The restaurant was spacious and the views were marvelous on such a nice and sunny day in Seattle.  Ray’s was celebrating its 40 year anniversary and the theme was Ruby.  We had lots of party decor in the ruby color and a birthday cake of pure red velvet deliciousness.

We were instantly greeted with sparkling champagne and got our picture taken.  Taylor Shellfish Farms were already busy shucking away three different kinds of raw oysters at the oyster bar.  The staff got me a pot of French press with a side of Baileys (as I had not yet had my coffee).  The waiters started bringing out tray after tray of so much good food.  There were smoked King salmon skewers with chimicurri sauce, excellent crab cakes with aioli, and sirloin skewers with those maitake mushrooms that I love so much.  Cocktails and beer could be had at the bar and the event was supposed to be a mingling for Yelp members to get to know one another.  I did so by getting to know a girl named Michelle and sat with her during most of the event.  Seeing the boats go by on the water just made the location super special. 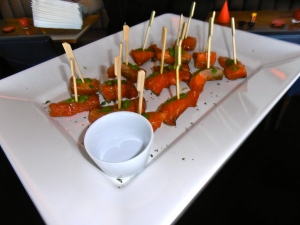 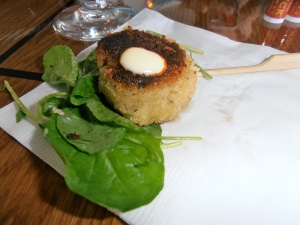 After a short intermission on Saturday I then made way to an awesome foodie event called the Seattle Street Food Pop-Up Picnic.  Twelve chefs from around Seattle were putting their spin on street food in creating one dish to present in a competition of sorts to all attendees.  I volunteered and got to see the set up, the cooking, the presentation, and the finished product of each 12 chefs.  I also got to know these chefs a little better by names and faces. 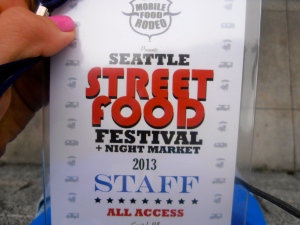 There was so much good food.  I mean everything I had was phenomenal.  There was a few different ceviches, prosciutto wrapped rabbit loin with mustard and fig, a sticky rice in banana leaf stuffed with a spicy curry shrimp, fried spaghetti and meatball on a stick, fried chicken with sweet and spicy Asian sauce, a take on a reuben, an iced lollypop with jackfruit and lychee, a yucca empanada stuffed with chicken and potato, a foie gras corndog with huckleberry mustard, and a dessert of such complexity. 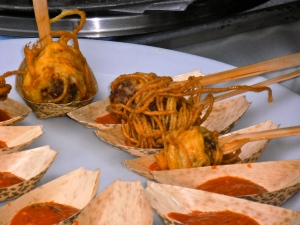 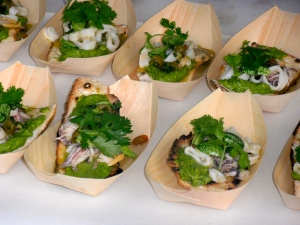 I would say that my favorite was surprisingly the fried chicken.  The chicken was cooked to perfection.  The sauce had all of the contrasting flavors you would want.  The peanuts and kimchee added a nice crunch.  And presenting them in little Chinese takeout containers was really cool.  The fried spaghetti and meatball was also really cool and really delicious.  And the dessert was heavenly.  I didn’t know how it would work but it did.  It was a crust of cornbread, then topped with a perfect custard (not too sweet like most are), some creme fraiche, some liquored up peaches, and a topping of bacon caramel corn for crunch.  It was amazing!!

I had a great time eating, listing to the band, and enjoying the fun atmosphere.  It was a really awesome event and with tickets at $165 I felt it was a real treat to be able to volunteer and get a tasting of it.