This past week I would like to focus on two kitchen adventures that took place:  Jamming night and Mystery Box Challenge.

After our weekend in Oregon resulted in probably 40 lbs of cherries, 10 lbs of apricots, and 10 lbs of peaches, we knew that we had to do something with them fast.  Monday night we held a jamming night at the house.  I first pitted about 10 lbs of cherries using Polly’s cherry pitter.  Then I set to making a spiced apricot butter and Polly set to making a cherry orange marmalade and preparing the canning jars with her canning set.

My apricot butter was easy.  The apricots were so soft that I just pitted them and split them with my hands as I added them to the pot.  I probably used 75 apricots and filled the pot.  I cooked them down a bit and then pureed them in the food processor before adding them back to the pot.  Next I added just a bit of sugar, cinnamon, nutmeg and ginger to the apricots and then let them reduce down on the pot for about one hour.  Polly helped me fill 6 jars and seal them up.

Polly’s marmalade came out really nice, with orange peel and whole cherries throughout the gel.  We ended up filling another 6 jars with her marmalade and sealed those babies up.

Because the apricot butter did not take much time and I had already pitted so many cherries I went ahead and made a cherry chutney.  This recipe called for vinegar, granny smith apples, onions, ginger, and Chinese five spice in addition to the cherries.  I am still debating whether I like the outcome of this one as it’s meant to pair with meats and I haven’t tried it that way but on its own the vinegar is a little strong for my taste.  I even added a touch more sugar.  I used about a quarter of the chutney along with EVOO and balsamic vinegar to puree in the food processor and make a spiced cherry vinaigrette for salads.  This tasted really good!

Lastly, Polly used up the last (though we still have tons of cherries left) of the pitted cherries to make a spiced cherry jam.  This used cherries, pectin, sugar, amaretto, nutmeg, and ginger.

I’m excited to give away a few jars and a few bags of cherries and to have so much goodies to use and try in the next coming months!!!  And we still have the peaches ripening.

Wednesday, July 31st marked the first ever Mystery Box Challenge.  I was anxiously awaiting Bryan’s arrival with the goods, not knowing or even trying to guess what the ingredients would be.  He came with the box and a bag of ingredients and explained the rules:

So I open up the Mystery Box and there alone sits tofu.  We had just had the conversation that I like tofu when cooked well in Asian restaurants and the like but have never really cared for it when I have tried to make it.  And he had told me only once in his life did he like tofu, which was fried in a Thai restaurant.  But alas, I was given tofu.  His bag that I could use or not use included some great ingredients.  I had a red pepper, orange pepper, broccoli, carrots, zucchini, bean thread noodles, and soy sauce.  I knew I would do Asian but the idea didn’t jump to me right away.  I’ve never used bean thread noodles but have eaten them in soups and salads.  Then I knew what I would do.

My plan was to first get the tofu marinating as that would be the most crucial to time limit and taste.  I prepared a marinade of equal part soy sauce and EVOO, garlic, a smidge of ketchup and sugar.  I pressed the tofu to remove its juices, sliced it into about 1/4″ thick slabs and added it to the marinade.

With the vegetables I wanted all of the colors and to have similar shape.  I julienned the zucchini, bell peppers, and carrots into small slivers and quickly sauteed them in my wok just with salt and pepper for a few minutes to get them soft.

For the noodles all I did was add hot water to them and let soak to soften.  Once soft (about 5 minutes) I drained them and tossed them in a dressing of equal part sesame oil, soy sauce and lime juice.  I tossed the vegetables with the noodles, added sliced raw jalapeno and fresh cilantro and put in the refrigerator hoping that it would chill in time.

The last step was cooking the tofu.  I’ve tried sauteing or pan-frying it before with little success so I decided to grill it, knowing the boy likes to grill anyways.  I liberally sprayed the grill so it wouldn’t stick and did a very nice job getting good grill marks and a nice crust to the tofu.  I grabbed to plates, arranged a mound of the noodle salad on the plates, wiped the edges to look clean, topped the noodles with another sprig of cilantro and some crushed peanuts and then topped each plate with 4 slices of the grilled tofu. 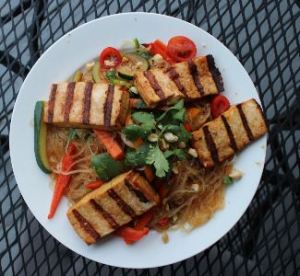 It looked very pretty with all of the colors, it was not lacking in flavor, and the contrast of cold salad with hot tofu was really nice.  I was very pleased with the dish that I presented and Bryan loved it but really didn’t think he would like whatever I made with the tofu.  There would be very little that I would have changed if I did it again now having more time to think about it.  I do see now that Bryan was probably wanting his favorite Thai dish Pad Kee Mao with his choice of vegetables and honestly admitting that he didn’t know what the noodles he got were.  Round 1 was a success and did indeed test my limits (which was what Bryan was going for).